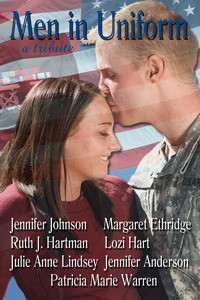 We admire a man in uniform, and what better way to celebrate it than a collection of stories inspired by men fighting to defend our country, and the women who love them? This sweet collection of romance spans the generations of men of valor from present day dating back to World War II.

Excerpt from The Imposter by Jennifer Johnson
Ding.
Paige wrinkled her nose as she stared at Giana’s cell phone sitting on the crate they used as a coffee table.
It was Liam again. The poor guy was deployed in Afghanistan, and Giana was blowing him off refusing to answer emails or calls when Liam’s number came up.
“Giana?” she called to her roommate who was in the bathroom dolling up to go out. “Liam’s emailing you again.”
“I wish he’d get a clue,” her friend replied.
“I don’t see how you can treat him like that, Gi.”
“It’s easy when he’s half a world away.” She walked through the room wearing four inch heels and a tight dress, grabbed her purse, and walked back into the hallway. “Liam’s a sweet guy, but who knows what is going to happen when he gets back, or even what he’s doing over there.”
“He’s probably sleeping in a sand pit somewhere wondering how come you won’t talk to him.” Paige picked up the phone and pressed the Internet email icon.
G, ur on my mind. L.
Paige bit her lip. The poor sweetie.
Glancing back toward the bathroom, she pushed the keys on the screen.
I’m thinking of you too. Miss you.
She pressed send and set Giana’s phone down quickly. In less than a minute, the phone signaled an incoming email.
Y cold shldr?
Why the cold shoulder indeed? What should she say? Because I’m a heartless bitch?
Paige glanced behind her to be sure Giana was still occupied with her reflection in the bathroom mirror.
“Are you sure you’re done with Liam?” she asked aloud.
Giana marched out of the bathroom, and Paige hid the phone under her thigh. “Look. I just can’t deal with him fighting a war for a year, and he told me most of the guys are having to turn right around and get redeployed within two years of coming home. That’s not the kind of life I want. He’s a nice guy, but even he’s not worth it.”
“Can’t you wait until he gets home to break up with him?”
“I am waiting until he gets home to break up with him. How mean do you think I am?”
Paige gestured to Giana’s attire with a raised hand.
“Oh, spare me, Miss Goody Two Shoes. It’d be easy for you to love him. You don’t have a life anyway.”
“Thanks a lot. I think you do enough socializing for both of us.”
Giana smiled wickedly. “That’s right. You go hit the books while I hit the bars. I had two men fighting over me last night.”
Paige resisted the urge to roll her eyes. She was pretty sure they both had won seeing as how Giana had stumbled in about eleven o’clock this morning wearing last night’s prowling clothes.
“Where’s my phone?” Giana’s gaze scanned the room.
Paige’s grip tightened on the phone while she, too, looked around as if searching. “Maybe it’s in your bedroom.”
“I haven’t been in my bedroom except to get my dress.”
Paige didn’t resist the eye roll this time as Giana stalked toward the hallway—probably to the counter in front of the bathroom mirror—her favorite spot in the apartment.
Quickly Paige pulled out the phone and sent another message:
I’m changing emails. Will email you from my new account.

Here's a link to a book review which includes a review for each of the stories. Another Look Book Reviews

Here is a portion from another review: Men In Uniform is great for the reader that just wants something quick, sweet and warmly romantic. Those that have a little thing for our men that serve and those uniforms they don daily.
I give the Men In Uniform anthology 4 stars
Scribbled by Unknown at 6:00 AM