The View is Different from the Driver's Seat 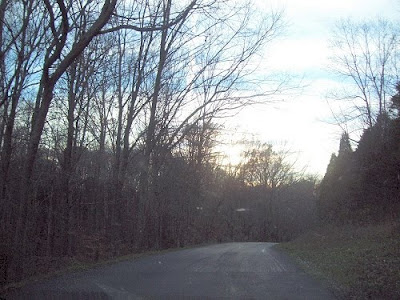 I'm embarking on a new journey in my life and I find that the view is different from the driver's seat.

I finally got my nerve up after about a month of having my permit and doing nothing with it and got behind the wheel yesterday.

And I drove around, hubby in tow, for about an hour and a half. Drove all over the outskirts of our small town to get me comfortable and I even left the county and drove down to Barren River Lake.

I can't say I wasn't scared—I was. And I'm scared of the next time I go out driving. Most would probably think I'm too old to be scared like this, but as I said in my blog post On The Road Again this year is a year of living bravely and I hate to admit that since I got my permit and then got sick the middle of last month, I haven't been very brave at all since then. I'm sure that the fear wears off after a bit of practice, but....

After we went through a month where each of us in the house were sick, my defenses are down and for me, being sick did nothing more than leave me feeling weak and tired and unmotivated in nearly EVERYTHING. My mini-vacation for Spring Break just left me wishing I had more time to simply relax and visit in my hometown, but responsibilities called me back. Kids have school to finish up and I have a household to take care of.

I had a nice time while I was up visiting my family and friends. I always do because it's where I'm the most "ME"- where I feel the most freedom and happiness- It's the place where I can breathe and feel brave and grounded again, which is something I haven't in a long while. Leaving from there always hurts just a little too much because my roots are there.

I need to find my bravery again and that also hearkens back to my lack of focus recently. Driving yesterday gave me about an hour and a half of time to direct my concentration- to do something that forced me to live bravely and focus—on the road ahead. I'm not sure if I mean that literally or figuratively, but I suspect it's a little of both.

I had a week away and I've had a week to try to get back into the routine, so I think starting today, this coming week— it's time to start focusing on the road ahead of me...not just when I go out to practice driving, but in everything. It's time to "force" myself to live bravely again and find focus in all things in my life. As my mom told me a while back, I need to make a plan and work that plan. If I want to make changes or see changes in my life to make me happy and get me where I want to go, I have to actually do something about it.

Hopefully I'll find that the view from the driver's seat becomes less scary—awkward—foreign and more like second nature—something common place and normal for me.
Scribbled by Unknown at 11:00 AM No comments:

Writing Life Out of Focus 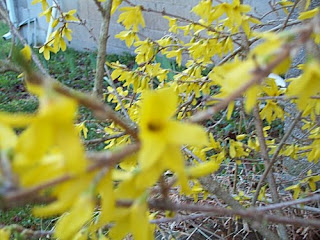 Springtime, warmer days, pretty flowers, Life- are all knocking me out of focus.

I can't seem to concentrate or get my head back into what I should be doing now that Spring Break has come and gone. The break away didn't do anything to help redirect my train of thought or help settle the rumblings of change in my soul as far as writing/critiquing goes.

Instead I'm thinking about how I need to declutter the house, keep an eye on my spring flowers in the yard that are starting to come up, anticipating the imminent arrival of the hummingbirds and looking back over March, which was such a sick month for everyone in our household and it doesn't seem to be getting any better where health issues are concerned.

I'm okay- typical stuff- allergies/sinuses. Hubby though is still fighting off illness. First of the year he got debris in his eye at his previous job and had to deal with the infection that arose from it. Last month he had a bacterial infection in his lungs but they also decided to check everything else—diabetes and thyroid tests came back fine, but they were concerned about his constant fatigue lowering his immune system, his excessively high resting heart rate and well, he's had pneumonia a few times in the past 5 years, so the doctors are always concerned about the scarring on his lungs and the fact that he's had it too often for his lungs to heal properly. Of course, the exhaustion led them to ask questions about his sleep habits and whether he snores, wakes up a lot and how big his neck is.

After measurements, chest x-rays and a consultation with a sleep doctor, he was told his esophagus is too small and his tongue is too big and the reason he wakes up off and on all night, it's because his brain is waking him up because he's suffocating on his tongue. His heart rate is high because it's working overtime for him and we found an answer to why Ambien never worked for him years ago-

When he had pneumonia in 2006, the doctors gave him that to help him sleep and instead it was the absolute reverse, it kept him wide awake. The sleep doctor told him it was because that pill, and most like it, is a muscle relaxer and your tongue is a muscle, so when he took the pills, his brain refused to let him sleep because of the possible consequences. He will have to go to a sleep study sometime soon, but the doctor seems certain he has sleep apnea and when he asked what would happen if he chose to go without treatment, the doctor told him he will die.

Of course, just when we thought things were settling down, he got a staph infection in his nose and we've been dealing with it this week. It wasn't getting better after the first round of antibiotic treatments over 3 days time—if his nose was still swollen, red and irritated they told him to come back to the doctor so he went yesterday. They were concerned because it had spread onto his face and up into his sinuses and they were worried about it moving into his brain and killing him, so they sent him to an ear/nose/throat doctor who changed the antibiotics and ointments up to something stronger.

This morning he said he's been able to drain the infection out some and his nose isn't nearly as red and swollen as it was, so we're hoping this helps and gets him on the road to recovery.

As with most things, you can't plan ahead too far- we live Life unwritten and out of focus most of the time as it is, so perhaps my writing is out of focus at the moment, but I've had to turn my attention elsewhere because that IS Life and we sometimes have to write Life out of focus anyway.

Have a great Friday and wonderful weekend everyone- Write On- whether in OR out of focus!
Scribbled by Unknown at 9:33 AM 2 comments: