It's been awhile- again- I guess the last time I posted was a couple of weeks ago.

Things here have been busy. It's not been hectic, but for some reason it had FELT that way for a while with the kid back in school and whatnot. I feel Fall setting in now though and there's a strange "humming" and it seems a regular routine is slipping back into place, but....
My yard is showing signs of the change in seasons and it would appear there is all kinds of changes and transitions afoot. Mercury is in retrograde now until the end of this month, though things won't be truly back on track until mid-October. Thank goodness it went retrograde BEFORE November and NaNo. I hate and avoid starting any new projects when it is.
I added nearly 2500 to the current manuscript that I am revising and editing, but that was on the last day of August. Since then, I've yet to do anymore work. I'm so tired of distractions and irritations....
It's just silly little things, but it's nerve-wracking nonetheless- like the little friend of my daughter's who thinks the telephone is a toy and has- in the past two weeks made a nuisance of herself because she doesn't know how to take "no, she can't come to the phone right now" or "don't call back again tonight" (after she's called back 10-15 times DURING supper). Stubborn, bossy and rude, I'm to the point of contacting her mother and having a talk because I honestly don't think the little girl's mother KNOWS she's been doing this. I'm tired of it and it seems my hubby doesn't want to deal with it, don't want to rock the boat and just wants to "ignore" it as though it's not a big deal. Arrrggghhh...There's NO way I'd allow my daughter to make a pest of herself that way. It needs to be nipped in the bud. 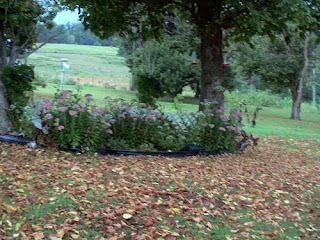 Yesterday I was a little more than irritable because a neighbor's dog had gotten loose from her chain and dragged our welcome mat off the porch and down the road. Hubby went and talked to the neighbor, who said he'd go get it, but hasn't yet.
That hadn't been the end of it though- she dragged my daughter's toy watering can across the yard and chewed the handle on it, bit the cap on a big jug of bubble blowing stuff and tipped it over and spilled it all over the porch and then got hold of a bottle of lighter fluid that had been sitting out there from when we grilled once and was using it as a chew toy. I luckily got it from her before she punctured it and spilled FLAMABLE liquid all over our yard. {rolling eyes}
I like dogs, but goodness gracious! It rattled my nerves. I've been so irritated recently and that was nearly the straw that broke the camel's back! LOL
I just want normalcy again. I want to FEEL like writing and working on writing and right now I feel like I'm on this kooky merry-go-round that won't stop and I can't seem to slow it down or get off so I can get back to my groove.
I hope everyone else is having a much better time of it with their writing and life. I'm going to try to start posting blogs more often. Just feel like I've run out of things to talk about because I'm not writing, so I don't feel like I have a wealth of things to say about anything in particular. Blah, I guess you'd call it.
Have a good one!
Scribbled by Unknown at 10:58 AM 1 comment: