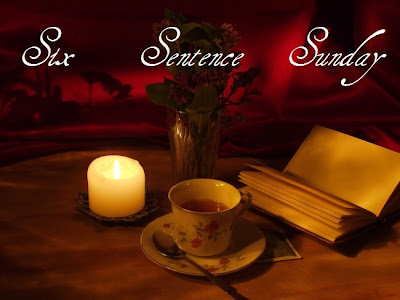 
Welcome Sixers! Can you believe it's already DECEMBER? Honestly not sure how we've made it this far this fast, but as they say, time flies when you're having fun! I slayed the 50K dragon on November 29th, but the story is far from over yet, especially now that I'm learning all kinds of things that are in the background about Mark & Alexa in HEART OF THE SURF. Little secrets keep leaking out that tells me far more than even my hero & heroine know. LOVE IT when that happens!
As always, for those who might not know here's what 6 Sentence Sunday is all about-

Pick six (6) sentences from anything you like (it can be from a Work in Progress (WiP), something you recently sold, something you hope to sell or even something already under contract and available for purchase – and don’t worry, Six Sentence Sunday is for published AND unpublished writers). Then post them on your blog on Sunday. That’s all there is to it!

You can add yours link to their official list by signing up before midnight the Saturday beforehand, but for any who are familiar with it, you probably already know they will be shutting down soon and there will be no more Six Sentence Sundays. That's not to say I won't still continue to share a little something on Sundays and I'm thinking seriously of just changing it up a little and calling it Sexy Snippit Sundays, or something like that.

Heading back into my currently unpublished contemporary romance, Love by Design, which is the one I'm planning to release as my first self-pubbed. I don't have a release date yet as I'm hoping to just make it through the rest of December and the holidays and in the new year, I plan to get down to business to get it out to you.

When his lips descended upon hers, every dream she had of this moment paled and faded in comparison. His lips were soft and tender, moving over hers. Slow at first, but with more intensity as she kissed him back, thriving on pure instinct.
His breath mingled with hers. His lips parted, tempted, and teased hers open. Uninhibited by the vibrations that rolled through her, she submitted to his persuasion.


If you missed previous Six Sunday posts from Love by Design and would like to check them out, look at the top of the page in my pink tabs for SSS Posts where you can easily find links to each previous post.
Scribbled by Unknown at 6:00 AM

Mmmm...delicious! Love the way you described the kiss. It's one of my favourite things to read, and you nailed it!

Thanks Julie! Glad you enjoyed it! I know Jasmine sure did! LOL