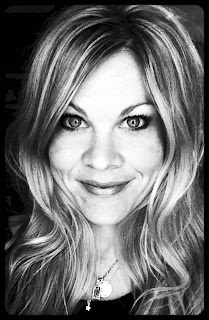 Taryn!! I’m soooo excited to talk with you about my novella HAPPENSTANCE that releases TODAY! I can’t think of a better blog to share than yours since my MC’s name is Taryn and you both are ah-MAY-zing and we are TMP sisters! WOOT!

This is just good mojo and I’m so happy to be here today celebrating with YOU! We can talk more about the book later because right now, you’ve got questions for me! I loooove questions. Let’s go! :D

What book(s) most influenced you as a writer?
Divergent by Veronica Roth, False Memory by Dan Krokos, Patrick Lee’s The Breach trilogy. I got into this writing for publication business fairly late (two years ago) and Janet Reid was one of the first agent blogs I read every day. So naturally, I wanted to learn what worked. She is a lover of fast paced, cut-to-the-chase, tense novels and I wanted to learn how to write like that.

What book do you read over and over again?
There are only a few books I’ve read more than once. One is Sandra Brown’s Texas Trilogy. I really love how she makes you fall in love with all three characters when you think there’s no way you could possibly love the next one as much as the last. But you do.

Another is The Thorn Birds by Colleen McCullough. Oh, the tragedies within and I can’t seem to get enough. I feel the Australian heat, hear the bustle of their dresses, smell the dust of the open prairies where the sheep roam. And a personal favorite of mine is by a lady I met while working at a video store when I was 19. She struck up a conversation when she returned “Bridge On The River Kwai”. She’d been imprisoned in a Japanese concentration camp and was writing a book about her experiences. When “Hell Came Twice” was published, I bought three copies and I’ve probably read Sonja Schulz’s amazing story at least four times.

Thursday Trio-
1) Movie- Gone With The Wind
2) Music- Opus 23 by Dustin O’Halloran
3) Decadent Dessert- Brownie with a scoop of vanilla ice cream, sprinkled with pecans. Because I’m sophisticated like that.

What’s the most interesting or bizarre bit of trivia you’ve learned from researching for a novel?
In researching the Arkansas/Missouri railroad of the ‘30s and ‘40s, I’ve discovered many amazing facts like security for hauling gold bars back then was a hired bounty hunter with a shotgun. Of course, I’m taking advantage of THAT!

Who/what are you currently reading?
Chocolate Covered Baloney by K.D. McCrite. She is hilarious and I happen to know her personally which is a double treat! Her writing is superb, snappy and super entertaining. I’ve learned so much from her.

Whom would you cast as your Main Characters/Hero/Heroine if your book became a movie?
I wouldn’t be able to breathe if my book became a movie, much less cast characters! But…if I was forced, I’d choose Kate Beckinsdale for Taryn, Chris Hemsworth for Devin and Chris Pine for Wade because of his dry and brilliant sense of humor. 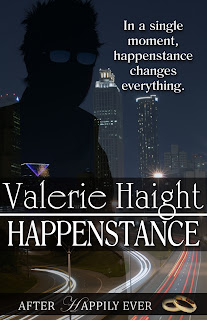 Taryn Ballard is happily married and a newly appointed analyst for a prestigious shipping company. Her career upsurges in record time but she's about to discover the real price of corporate life.

While on yet another business trip, Taryn suffers a brutal attack by a carjacker. Her husband isn't there, but her co-worker Devin is. The accidental bond Taryn and Devin share pitches them into dangerous and confusing territory. Taryn struggles to discern both her feelings for her sexy protector and Wade's reaction to it all. Unfamiliar emotions blur the rules of the game and Wade's ready to quit.

Taryn must rise above disaster to save her marriage. But is she ready to let go of the man who saved her life? In a single moment, Happenstance changes everything.


Valerie Haight is a short story writer and contemporary suspense and romance novelist. She is a member of Ozarks Writer’s League through College of the Ozarks in Branson, MO and a published author with Turquoise Morning Press.

You can find her scheming on the corner of Happy Trouble and Literary Mayhem, also known as Twitter @Valeriebrbr. Her author page on Facebook lists all the latest news on HAPPENSTANCE as well as her upcoming short in a wedding anthology, MAGNOLIA BRIDES. She also gives way more than her two cents on her website www.thewriteoneval.blogspot.com. To purchase HAPPENSTANCE, click HERE!
Scribbled by Unknown at 6:00 AM

Your book sounds amazing and heart-wrenching. Congrats on the new release!