The cat is my daughter's the spider my stepson's. 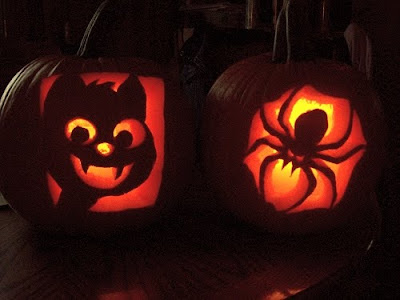 Scribbled by Unknown at 11:42 AM No comments:

NaNoWriMo 2009- Coming Soon to A Computer Near You!

Yep yep, it's that time of year again. I decided I will probably crosspost from here to my LiveJournal (and Myspace, as usual) this year- it would just make things easier, I'm sure.

I have a lot on my plate in the coming weeks along with NaNo- Today I am going to tackle carving the kids' pumpkins. Saturday we have a trip to Bowling Green to pick up the in-laws Christmas presents we're having made and I might see if we can do some last minute shopping for something for me to dress up as for Halloween that night. Of course, if the weather forecast for our area is right, it's going to be rainy and it's going to be interesting getting my daughter- the Southern Belle, in all her hoopskirt glory, in and out of the car in bad weather...I'm hoping to squeeze in watching Rocky Horror before Halloween's come and gone and there's also the Ghost Hunters Halloween special on that night, too....But that's just the beginning of the insanity-

That night Time "falls back" and it will be Midnight Cinderella- my beautiful coach will turn back into a pumpkin and as the mice scurry away back to the attic- the real fun for this Noveling Princess will begin.....I don't have a Prince Charming- unless you count my hero, but he has a heroine of his own to win over, and I will have NaNoWriMo chasing me down through the cold falling leaves of November to find out if my glass slipper still fits and if I still have the ability to accomplish a LOT in so little time- especially with so many other things going on as well.

Once November gets underway- I will be writing like crazy as well as cleaning house and getting decorated for the holidays- tree goes up, Christmas village pops up on the shelves, outdoor decor lights up the evenings, then filling out all the Christmas cards, wrapping presents, baking some goodies, Thanksgiving with my family and this year- before Thanksgiving we're having a weekend get away with Hubby's dad's side of the family to Pigeon Forge, TN.

Sounds like November is going to be JAM PACKED with excessive writing and all kinds of travel and holiday goodness! Yummy!!!! Can't wait to take a bite out of it! LOL And that doesn't even include the children's birthdays within the first 2 weeks of December and then Christmas and New Year's..... Wow!
Scribbled by Unknown at 10:37 AM 2 comments:

Just wanted to post a quick promo and shout out for my fellow KYRW who will be in attendance at the Kentucky Romance Writers Day multi-author book signing at Joseph-Beth Booksellers from 1-3 p.m on October 31st- this coming Saturday.

Love romance? You'll find stories in all romance genres by a LOT of talented women at this book signing! Drop by Joseph-Beth and meet these fabolous ladies and find some great books to enjoy by the fire on these cold Autumn evenings.

Things just have NOT gone the way they should in recently weeks. Stepson was out of school sick September 14th- 18th with a fever, lack of appetite, nausea, but it wasn't the flu in any way, shape or form. He went to the doctor on the 14th and they thought it was an ear infection. They ran the flu test, nope...Took him back Wednesday when his fever hadn't gone away and they said it wasn't an ear infection and told us to take him off the Amoxicillin- ran the flu test again and- nada...Just gave him oral suspension meds and said to keep him home the entire rest of the week. They couldn't figure out exactly what it was....He had a lot of homework to make up (and suddenly developed sniffles when that was picked up from school for him to work on while he was home sick LOL) and he missed out on the ONLY school photo day they were going to have this year. No retakes for some reason...not sure why...

Got him back in good health and back in school for a full week and then they were out for the 28th because of professional development day for teachers- they went 4 days after that and have been out since for Fall Break.
Fall Break hasn't gone well at all. We left out Saturday the 3rd to go visit my family in L-burg for the week. Girlie Girl was fine when we left that morning. That night, she was running a fever. She was miserable every day, spiking high fevers and just not feeling well at all. When I talked to hubby when he got home from work on Tuesday we decided it would just be better for him to come get us so I can try to nurse the sick little thing back to health here from the comforts of home. We got home late that night and I took her temp- she wasn't even running a fever anymore. Just congested and croupy now.
This, of course, falls during hubby's change of jobs, too. He just started a new one- had to take a lower paying job because the other company he had been at for 6 years is on it's way out...so needless to say, there's a shift in that part of our lives, too...
Seems we're still riding the tail of the Mercury retrograde that happened last month. Sure, Mercury turned around on September 29th or so and has been heading back in the right direction since- but I think we're still feeing the affects of the retro and I don't like it. I had hoped to enjoy my trip my parents this week and that got cut short and Girlie Girl HATED to leave...she wanted to stay and visit with her grandma and pop pop, but well, sometimes things just don't work out the way you expect them to.
Rather than posting a separate blog about exercise on Taryn Up in Smoke, I'll just mention here, in passing that I haven't weighed recently- I did my measuring last week (the 29th) and HAD lost 1/2 inch on all accounts- waist, abdomen, hips, thighs, and calves. I'm not sure I will be able to say that come next Tuesday's measurements though since this week I fell off the exercise wagon while I was at my parents and since being back home, I haven't yet gotten back to doing the Gazelle or watching my meal intake. Gotta get back to that for sure!
And in the last bit of news- I already ordered my NaNo shirts and made a small donation that will go to the YWP (Young Writers Program). The top photo is of the official NaNo 2009 shirt with the "noveling" machine on it- feeding in ideas and spitting out books and stories. The second shirt's design is simply for fun- the idea of a camp getaway for those of us participating. I meant to spend some of this week deciding which brother's story I will write during November, and get a bit of the characterization interviews and outlines done, but I've yet to find time between traveling a sick kid and traveling back home and still tending to a slowly recovering sick kid. Definitely need to get on the ball though considering there's just barely over 3 weeks till November arrives and along with it the need to actually concentrate on writing again.
I wish all a wonderful day and wonderful rest of the week. Have a great one! 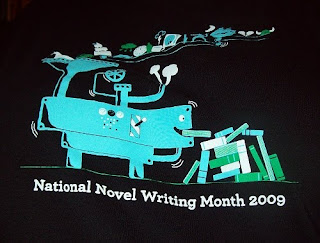 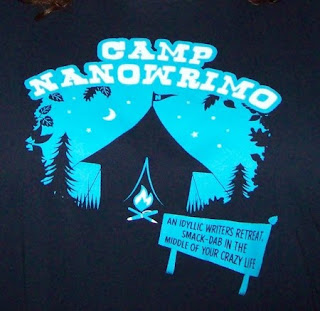