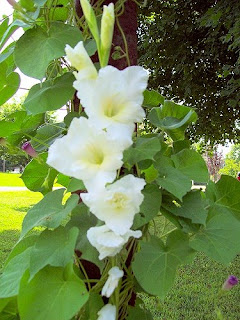 Gladiolus that is. Ain't that the picture of beauty and innocence? I've had a few pink ones this summer, this stem of white ones and a purple that I caught too late before I realized it had bloomed and it had started to die back.

I'm still feeling the end of summer lingering around my doorstep. Today it's overcast with deep gray clouds and it just doesn't seem like my kids will be back in school a week from today. Yet here we are at the threshold of the autumn and the beginning of another school year.

I'm trying to wrap my mind around revisions and writing again. It's become such a struggle though I really NEED to do it. This year has really truly SUCKED for me...I can't seem to stay "in story" long enough to think things through. My kids are constantly fussing and bickering amongst themselves or hollering for me and then I get sidetracked by games online and perhaps that's where my issues are- I need the quiet of an empty house, no arguing voices in the background and the determination to pull myself away from the internet's distractions long enough to get some real work done.

And hopefully with the start of school I'll get that. I'll have the house to myself again for several hours during the day and hopefully it will help be get my focus back. For now, I'll simply focus on these pretty glads and take a deep breath- Only a week to go..;o)
Scribbled by Unknown at 3:03 PM 1 comment:

Article in the Lexington Herald about KYRW

Publicity for my local Chapter of RWA.

Revisions are still slow going- I jumped into the next one, but have been finding it hard to concentrate- mostly because the one I'm working on seems fairly well put together and there are so few places I feel need changes(it's one of my more recent works, so that should be a good sign that my writing method and voice are getting better, right?). That doesn't bode well though when I need to add another chapter and lengthen the book by about 80 pages. Geez...what did I get myself into writing such a short novel? It's the last of the first 4 book series and I need to make it match up to the others! LOL Right now I would rather pull my lower lip over my head and pretend the work is all done. :o)

This week has not been kind to me where the revisions are concerned anyway. I'm minus one kid (who's gone to his mom's), but find that having just one kid who wants to talk to me ALL the time makes it a lot harder to concentrate than 2 kids playing together and leaving me be for the most part- except when they start to get under each other's skin and therefore, on my one and only nerve. That's the breaks, I suppose.

Of course, the lack of concentration also doesn't help when the one day I had all to myself was spent doing other things. Yesterday, while my darling daughter was gone to Grandma and Pa's, I had to mow some of the yard because the weather was calling for a few days of storms and rain and it needed to be mowed before that happened.

I got my part done, but by the time hubby got home, it was sprinkling/raining/storming so he couldn't finish the rest of it with the riding mower. Sigh...

It was yesterday that I finally noticed what a few other people I know have already mentioned in their blogs recently.

I know we still have a while before the actual change of seasons, but I FEEL it already. Just as I do with other changes in the seasons, it was there. Not pouncing on me in an obvious way - no, it was subtle and invaded my senses slowly and quietly.

The sky was clouded over for the most part, though the longer I was out there the more often the sun peeked out from behind those massive gray behemoths hanging over my head. I could barely make out the paths the mower blade shaved, though it was doing a good job of spitting out plenty of grass clippings and dried clumps from last week's mowing. The mower reminded me of an old farmer spitting chewing tobacco, coughing and sputtering and complaining of the heat.

The air was muggy and like dragon's breath and smelled of gasoline and motor oil and I was sweating. My cheeks were rosy beneath the sun's blistering stare each time it broke through the clouds. The lawn mower roared around me and music blared through my headphones, dancing me along in my mission to get the grass cut before the rains came.

And YES, I lipsync along with my favorite songs and I imagine the neighbors shake their heads and raise eyebrows in my direction when I hit on a beat that hammers into my soul. Sometimes I get caught up in it in a way that makes me want to strut and boogie down with my bad self while I'm moving along to the beat, and I forget everything but mowing and good music.

Yesterday though, even over the roaring mower and even over the music, there was something else there. I could hear it, feel it, smell it, taste it and nearly see it as I mowed over a few dead leaves- the few rogue soliders who have already fallen before the war between the seasons has even truly begun. I'm not sure if they were battling the summer heat or the late summer beetles, but it felt wrong to see them scattered about.

The overcast haze of the day and the barely tolerable heat couldn't disguise that feeling- a sinking in my soul- that sense of melancholy that another season is almost at its end and the next is ready to rush in on us. July is only half over, but I realize that means that its only a couple of weeks before my kids are back in school- 1st grade and 5th grade. Wow! Seems only yesterday summer vacation just started! Where did all that time go? And with the beginning of school we also start to usher in the changes of the season and before we know it all kinds of holidays will come and go again so quickly and 2009 will come to a close.

I need to get through these revisions in the next few months. Mercury goes retrograde at the beginnning of September and goes back direct at the end of that month, but things don't straighten back out completely until it returns to where it went retro to begin with- so it will be mid-October before I should start any new project- This happens just in time for the start of NaNo this year! Yay!

So, now that I've rambled for quite a while...I'll leave you with a recommendation of a children's book that even an adult would love-

The Story of May by Mordicai Gerstein

My sister found a hardcover copy of this book for my daughter at the Goodwill Store for like 50¢. The first time I read it to my daughter, I was in tears by the final page after following the little month of May, the daughter of April, as she journeys through the landscape of the rest of the year. Along the way, she meets her other monthly relatives who help point her in the right direction to meet her father, December, who she has never known and learns about why the months have the places they do as she travels. It's a wonderful book full of beautiful, colorful pictures as well as descriptive and colorful words and it's one of my daughter's favorites and mine, too.

I looked it up on Amazon and it is no longer in print, which I think is a real shame. Through sellers on there, as well as a few other used booksellers online, I've discovered that this little gem of a book we got for pocket change goes for anywhere between $20 and $80- used. I hate to imagine how many children (and adults) will miss out on this book because it is no longer in print and because its so pricy to buy used. Such a shame.

If you can find it at a bookstore or at your local library, it is definitely worth checking out, especially if you have little ones. It's a rather long story, but my daughter, who's 6, will sit through the ENTIRE reading- over and over. (The reason I even mention this book in today's blog is because that was her pick for the story I read her last night at bedtime.)

So, anyway...I will take my leave now from Blog World- Having breakfast for supper tonight and need to get some dishes washed up before I start cooking and make some homemade biscuits.

Have a wonderful evening!
Scribbled by Unknown at 4:16 PM No comments:

I'm starting to feel like I'm getting back on track. I took time to do some leisurely reading and finished one book I had started reading months ago. I enjoyed my 2nd trip to visit my family last week, but found a distinctive and clear desire to work on my own writing started to gnaw and chew at me as the week wore on.

I would have done some work on it if I could have, but my memory stick is incompatible with my parents' old document program, so I jotted notes to myself about the things I need to do. I started setting forth goals again for myself to get all the revisions done (on my 9 finished manuscripts) so that I can submit some things and get my butt- and my head and heart- back in writing mode.

NaNoWriMo will be upon me in no time as it is and so I must have the revisions done by then so I can get to work on the 2nd book in my 2nd series. Pretty bad when I've spent most of this year doing nothing. To have been so productive the past 2 years and look back and see how much I accomplished and then to look at 2009 and realize that other than working a few revisions here and there, I haven't completed anything else is a staggering difference that I'm not very proud of.

I had serious writing burnout though and I know that. In 2 years time, I used up my best supply of writing energy and I collapsed in a puddle, feeling unmotivated to move forward and wrestling with overwhelming self-doubt. I need to learn to pace myself so I don't spin out like that again.

I'm getting things sorted though and once I'm done with the revisions on what I have finished, I'm making an exerted effort to write and then revise directly after- not write and write and write and then attempt to revise a lot of different stories in a short amount of time. I need a plan and I'm getting it laid out, as well as learning what works for me as far as the page/word count stuff. That has stumped me for a while, but I think I'm starting to get it, too.

Here's to making the rest of 2009 productive for myself in regard to my progress toward becoming a published author. I need to find consistency and make it work for me, not against me.