A Nice Day Out and About 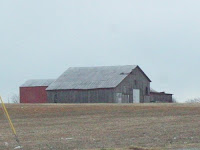 Had a nice day out and about. We had to get the oil changed in the car, so we headed out well before lunch and afterward we hit Wally World to get a few things our grocery doesn't carry. Oddly enough, it seems they're phasing out my type of laundry detergent and they didn't have the perfume free/dye free Downy I need. Hubby said he'd check at the Wal-Mart in the county where he works.

I got a few things I needed- more ink for the printer, a new sink stopper for the kitchen (the water kept draining even when plugged.), some shampoo and other particulars, plus a few grocery items.

Today was both my mother-in-law and my father-in-law's birthdays- she older by 1 year, so Hubby got both a card. After Wally World, we ran by Long John's and got a late lunch and took a different route home to drop off MIL's card at her house and then bypassed our house to drop off FIL's, as well.

The barn above is one I took a snapshot of on our way to MIL's. I was playing with my new camera and the barn was actually far off the road, but I zoomed and I used the "sport" focus to catch it in motion as we drove by. I love my new little camera. 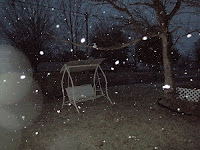 This is the view out my kitchen door this evening. We actually have snow. I've got a lot of shots of it and well, again, my new little camera amazes me. It CATCHES snowflakes- something my old one couldn't seem to do. Hehehe!

Normally I don't get excited about snow anymore, but it thrilled my 6 year old to no end to see snow, especially since I was chatting with a friend of mine from back home and she was getting snow at that moment. Daughter was whining we weren't getting any and then a little while later I looked out and sure enough, it was coming down. :D

Nearly Baby Girl's bedtime. Time to read. The reader and writer in me has created something special there for my kids, though sometimes it can be hard to fit in reading time when bedtime rolls around, especially when 6 y/o drags her behind, but I try my best to keep it going because I know how much of an influence it has already had on her.

When she was barely able to talk (a year old or so), she knew some of the stories I read to her at bedtime so well, she could tell me what the next word was before I even said it. I don't think she SAW the words so much as memorized them, though. Bless her heart. She was so jealous when her older brother learned to read because she couldn't, but she's really endeavoring to learn for herself. She's already doing great on the basic words she's studying for school and she tries very hard to read books with me, though sometimes the books are a bit too advanced for her age range. 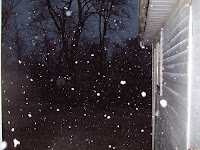 Have a wonderful Saturday night!

Scribbled by Unknown at 8:03 PM

Hi Taryn! It's nice to get out with the hubby now and then and just shop or whatever. I'm glad you enjoyed the day together.

Love the pictures, especially the barn. The landscape around it looks so flat/level. It's hard to find a piece of level ground over here in the hills, so I noticed it.

We've got snow over here, too. There's already at least an inch on the ground, and it's still coming down, though not as hard as before.

Very pretty pics of the snow! It's really beautiful when it's falling! Glad you had a nice day. I love those days too, when you don't really do much, but you're together.

What a nice, peaceful post. Makes me feel all warm and snuggly.

I miss reading time with my son. Those are precious times, and I'm glad you're able to enjoy them together.

Thanks ladies. Glad you enjoyed the pics.