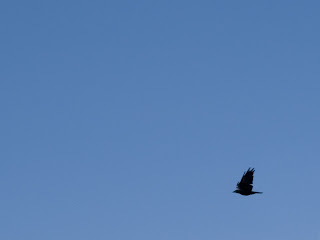 This morning I'm feeling like a lone bird in flight. Last night a friend, a dear sweet friend who had recently gotten back in touch with me, dropped off the radar. I don't know why, but it leaves me feeling lost and baffled by the behavior.

It's not like I'm not used to it. This friend has been in and out of my life since the summer I was sixteen. I was a "Goody-Two Shoes" because I was a good kid, didn't sneak out, didn't get in trouble, or do anything bad. Heaven forbid! LOL

But a friendship still grew between us. I attribute the fact that I came out of my shy shell to this friend. I stepped outside my comfort zone and this friendship altered and transformed me into who I am today. I'm not sure my friend knows or understands what an impact he has been on my life.

And though we only recently got back in touch- he found ME on facebook- it appears he is gone yet again, flighty little booger. :) All the times before I had little reason to worry about him, but now, I just feel he needs a friend and he started to turn to me, but for some reason, he pulled away and decided to close the door behind him again. I probably won't hear from him for a while.

Probably a great long while and I'll miss him and I'll think of him and keep him in my prayers, as I have always done, but his path is much different than mine. In the last message I sent him, I told him I was here for him- just a phone call away if he ever needed to talk and I hope he doesn't forget that. (sigh)

Friendships are such a funny thing. We take them for granted so often and I suppose I should be thankful I did hear from him, even if only for a little while. I'm going to take my lone little self and concentrate on my revisions that I need to get back to today and hopefully not think too much about my friend and his sudden withdrawal from my life again.

Hope everyone else has a wonderful Monday. (Can you believe this month is almost over already?)
Scribbled by Unknown at 8:44 AM

Taryn, who knows--you may have had as much impact on your friend as he has had on you. I'll bet even before you told him yesterday, he knew you're there if he needs you. Some people just have a very difficult time asking for help.

Ah, gosh, Taryn. Your post struck so many familiar chords. All I will say is, try not to grieve and worry about it too much. Sometimes time and distance alters the dynamics of relationships. This friend knows how to reach you. If he values you as much as you do him, he'll get back in touch when he's ready. I wish I had something more comforting to say. {{{HUG}}}

Thank you both so much.

Taryn, it sounds like he knows you'll be there for him when he needs you. You may just have to wait for him once again.
Don't worry , he'll be back.

For all my worrying yesterday morning when I posted, he did get in touch with me shortly after and he's fine, just not on FB.

Thanks so much ladies.