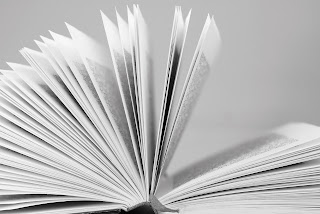 Yesterday I spent the majority of the day knee-deep realigning my chapters, other than a brief time to stop and chat on IM with my best friend. I did hear from my other friend I was worried about. He's fine and still in touch- just not through facebook.

Today I'm going to make one more pass through the last few chapters of the revisions I was working on, just to double-check what I got done last night. I got the chapters lined out and the right amount of pages and the word count is just about 1K different from the previous novel, so not too shabby. There's some relief in that knowledge, but I do believe I will move on to working the revisions on the 3rd book in that series and getting it lined out now. The other needs to simmer and settle before I can come back with fresh eyes again.

The other night hubby and I had a funny little conversation. We were watching something that got us into the realm of men doing romantic things for no reason. I think it was something on Good Morning America or Dr. Phil- can't remember, but it had to do with keeping the romance alive in a relationship.

I told him he rarely does that sort of thing for me and that usually it's only for special occasions- sometimes. He got me roses and a card for my birthday. For Valentine's he took me to see a movie, but there were no flowers or even a card. That didn't bother me. I enjoyed the movie and the day out with him. That was a really nice break from the norm. Then he pointed out this blown glass frosted pink rose on my trinket shelf and said, "I got you that for no reason."

I reminded him that he got me that glass rose almost 8 years ago, when we first got together and I asked him what he had gotten me in more RECENT years- even something small- for no reason. He couldn't think of anything and neither could I! LOL

I told him I attribute it to the fact that girls are raised on fairytales and boys aren't. We girls set high standards based on the happily ever afters we grew up on and then we're disappointed when the man doesn't continue to lavish us with flowers, trinkets and expressions of love. Men don't realize we expect those things to continue, because they didn't grow up on fairytales and have a lower expectation of what life will be like after they win their lady love.

Women think- "Yay! I got my Prince Charming and it's going to be lovely because he will always ride in on that white steed and sweep me off my feet!"

Men think don't think that way. They don't see "Princess Charming" and they don't expect us to be more than we are. In all honesty- men are more realistic and we tend to expect the fantasy to go on and on.

So, yesterday I was thinking about this song we heard on Sunday while we were watching country videos. It's by Jamie O'Neal and it's called "Like A Woman." I'm sure there are plenty of times in a woman's life she's felt that way. The song brings me to tears.

I thought how sweet it would be if hubby remembered that conversation and the song and did, for once, bring me a little something to make me feel like he still sees me "like a woman." It wouldn't have had to be much, just something to let me know he was thinking of me in a "romantic" way- not just as the wife and mother, but as the woman in his life. He had emailed me early on to tell me he picked up the laundry detergent. Real romantic, right?

Well, he had to stay over at work, so the kids and I ate supper and got it out of the way after he called and let me know he'd be a bit longer, but the best part was when he came in and gave me these- 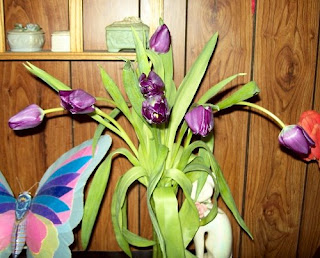 He said he had looked for purple roses, but only found the purple tulips. (Purple being one of my favorite colors)

I don't think anyone has ever given me tulips and I asked him why- what they were for?

He said "No reason- just because."

I teased him that he'd thought about that conversation we'd had, but hey! He was listening when I said it! haha!
Scribbled by Unknown at 9:19 AM

How sweet, Taryn! Maybe even better than the tulips is the fact that he listened when you were telling him you missed the unexpected gifts. Yay for both of you!

I hate to drop hints or even straight out tell him something he ought to know by now, but Dr. Phil would tell me that if I don't TELL him what I want, I won't get it. Hehe. So if I have to give him a nudge every once in a while, I guess I will...I get much better results that way!

Awww, how sweet. Isn't it nice when the men in our lives actually LISTEN to us?
I would rather have tulips anyway. You lucky girl!

Taryn, it's good that your husband cares enough to actually LISTEN to hints and act on them. There's definitely hope for him. ;o)

I'm glad you heard from your friend.