What book(s) most influenced you as a writer?

Oh, I ran the gamut from Issac Asimov to Rebecca DuMoire. Living in the country, going to the library was a big deal -- and we could get 10 books each time. Even then I loved stories with strong characters and a feel-good ending.

What book do you read over and over again?

Gone With the Wind -- there's just something about it.

What’s the most interesting or bizarre bit of trivia you’ve learned from researching for a novel?

While writing my vampire Ancient Shadows series (as Cammie Eicher) I did a whole lot of research on the Mafia code of honor and killing with liquid mercury, followed by ancient rituals. I am so glad the cops didn't seize my hard drive then.

Who/what are you currently reading?

The Devil in the White City by Erik Larson

Whom would you cast as your Main Characters/Hero/Heroine if your book became a movie?

Emily Deschanel as the heroine - Silas Weir Mitchell (from Grimm) as the hero. 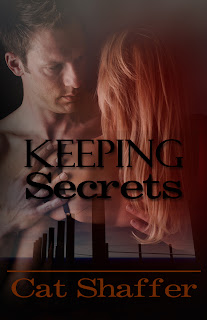 When Miranda Coulsen accepts a summer assignment that takes her to Colorado and away from her daughter, she doesn’t expect to encounter the sexy Rik Hallowell. He’s even hotter now than a decade ago, when they had a brief, sizzling relationship that fell apart once she returned to Michigan and Rik went back to the family ranch.

Rik has returned just long enough to get the place back in shape and hire a manager. His father’s death and his brother’s decision to take off without giving the ranch a thought has trapped him there for at least the rest of the summer. When he encounters Miranda, he realizes the sparks are still hot and he’s quite willing to engage in another summer fling…or more.

But they’re no longer the kids they used to be. And the secrets they’ve harbored for ten years may be far stronger than the passion they both feel and the love neither is willing to confess.

Keeping Secrets is currently available in eBook on Turquoise Morning Press and will soon be available through all other retailers!

Wonderful interview! Keeping Secrets is on my Kindle, Cat. Congrats!

great blog i have ever seen

LOVE, LOVE, LOVE your picks for the movie.

I'm sure I'll like Keeping Secrets because I enjoy all Cat Shaffer's novels!