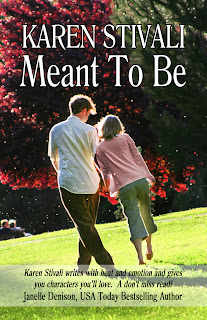 click image above to check it out on Amazon

Sometimes you’re already committed to the wrong person when fate finally brings you the right one.

When NYU professor Daniel Gardner’s career-obsessed wife convinces him to move to the suburbs, he hopes it’s a first step toward starting the family he longs to have. Instead of domestic bliss he finds his neighbor, Marienne Valeti. She loves her freelance design job, but must contend with a growing sense of isolation created by her husband’s indifference. A penchant for good books, bad movies, and Marienne’s to-die-for brownies sparks a powerful bond between them. Passion simmers, but they resist its lure, surrendering only in the seclusion of their minds. Their friendship helps them weather every hardship, from divorce to widowhood, leaving them both secretly wondering if it can survive a first kiss.

Karen Stivali is a prolific writer, compulsive baker and chocoholic with a penchant for books, movies and fictional British men. When she's not writing, she can be found cooking extravagant meals and serving them to family and friends, who never seem to mind the excessive quantities she tends to prepare. She attributes her ability to multitask to the fact that she rarely sleeps, which gives her more hours every day. Prior to deciding to write full time Karen worked as a hand drawn animator, a clinical therapist, and held various food-related jobs ranging from waitress to specialty cake maker. Planning elaborate parties and fundraisers takes up what's left of her time and sanity.

Karen has always been fascinated by the way people relate to one another so she favors books and movies that feature richly detailed characters and their relationships. In her own writing she likes to explore the dynamics between characters and has a tendency to craft romantic love stories filled with sarcasm and sexy details.

To learn more about Karen you can visit her website karenstivali.com where she blogs original recipes, sassy commentary on The Bachelor, and tidbits about her journey in the writing world. Karen can also be found attempting witty banter on Twitter
http://twitter.com/#!/karenstivali
Scribbled by Unknown at 6:00 AM