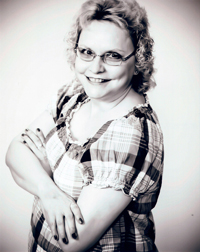 What book(s) most influenced you as a writer?
I've loved reading for so long that it's difficult to narrow this one down. The Large and Growly Bear by Gertrude Crampton and illustrated by J.P. Miller, Anne of Green Gables by Lucy Maud Montgomery and Dancing at Midnight by Julia Quinn.

What book do you read over and over again?
Fireflies in December by Jennifer Erin Valent and more recently Divergent by Veronica Roth. I admit to re-reading the Harry Potter series as well.

What’s the most interesting or bizarre bit of trivia you’ve learned from researching for a novel? Interesting: there's a difference between being in a Coma and being in a Vegetative State. Bizarre: there is a Van Halen Encyclopedia online. I know, there are more bizarre things out there, but this really blew me away.

Novel on your Nightstand:
Who/what are you currently reading?
Book One of The Toadhouse Trilogy by Jess Lourey

Whom would you cast as your Main Characters/Hero/Heroine if your book became a movie?
Paz - Kayla Clary 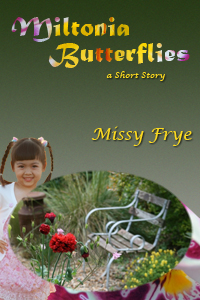 Miltonia Butterflies Blurb: The garden young Paz passes on her way home from the library is a temptation she cannot resist. Within it's borders a beautiful flower awaits.

Once discovered, Paz longs to share its beauty with her mother. To do so, she must overcome a few obstacles and reveal something about herself no one knows.

Miltonia Butterflies will be released October 21, 2012 and the first week's proceeds will be donated to the

USO's Indie Writers for the Troops.

If any other writers would like to join the fundraising, you can donate proceeds from one day, one week or simply make a one time donation.

Thanks for interviewing me and helping to get the word out about the fundraiser. You're a gem!