What book(s) most influenced you as a writer? I remember reading Jessica Barclay’s Into the Sunset when I was a teenager, and starting to realize what man/woman love was all about. After I devoured that book, I started wading through my aunt’s boxes of Harlequin Presents. The women of my family are voracious readers, so it seems natural to me now that I am a writer.

What book do you read over and over again? I have to admit, I have three copies of Sherillyn Kenyon’s Dance With the Devil, and I read it every few months. That woman knows how to torture men. I read the BDB books a lot as well. I think you can find a lot of instruction in gut-check books like these.

What’s the most interesting or bizarre bit of trivia you’ve learned from researching for a novel? Well, I’m investigating how paraplegics make love for an upcoming Veteran series, and one thing that they use is a sling for intercourse. I’ll leave the imagery to you guys.

Novel on your Nightstand:
Who/what are you currently reading? Teresa Reasor’s Breaking Through is currently bookmarked on my phone and I’m reading it every spare minute I have.

Whom would you cast as your Main Characters/Hero/Heroine if your book became a movie(can be anyone)? Well, Liam Hemsworth could play Matt perfectly. His hair needs to be a little darker, but otherwise he’s a perfect fit. As for the female, I envision kind of a Reece Witherspoon type of girl, a little clumsy/ditzy but with phenomenal heart. 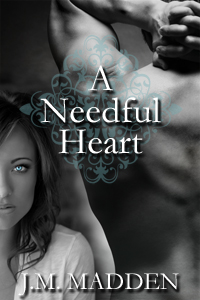 Matt Calvin has watched Gina’s beautiful behind sway up and down the doctor’s office hallway once a month for four long years, and it’s time to do something about his fascination. He’s not relationship material, but he doesn’t expect it to get that far. He just wants to talk to her, man to woman, and put himself out of his misery once and for all. Things never go as planned, though, and when fantasy crashes and burns into reality, Gina pays the price.

Gina doesn’t blame Matt for her injury, but she is appreciative when he steps into her crazy life to help out. Proximity fires sudden attraction between them and Gina can’t believe she’s overlooked the sexy carpenter for this long. Tattooed and intimidating, he’s not the type she’s normally drawn to, but something about him tugs at her heartstrings.

When an explosive situation develops and they have to save a little boy, Matt loses control of his tightly held anger. Though his heart aches, Matt walks away, both for Gina’s safety and his own sanity. It’s up to Gina to convince him love can heal any heartache.

You can find out  more about J.M. on her
Website/Blog
Follow her on Twitter
Scribbled by Unknown at 6:00 AM

Good Morning Taryn! Thank you so much for having me on your site.
You know, I realized something when I answered your questions. All of my answers involved strong women. And that has carried over to what I write, as well.
It took me by surprise for some reason.

Morning JM! It's great to have you here.

Isn't it great how sometimes you discover things about your writing and yourself, that you didn't even think about until you have to answer a few questions?