Please help me welcome Jacqueline Corcoran to Tuesdays with Taryn this week!

What book(s) most influenced you as a writer?
I read almost exclusively mysteries, so I am influenced by this genre, and I read almost always female writers as I find I can identify better with the viewpoint.

What book do you read over and over again?
I’ve only read a couple of books more than once.  The most recent novel I repeated was Bridget Jones’s Diary.  That had to do with the fact that it really resonated with me at that period of my life.

What’s the most interesting or bizarre bit of trivia you’ve learned from researching for a novel?
I learned the most from researching a steampunk-inspired historical paranormal I wrote last summer.  I hadn’t written an historical before, and I learned all manner of detail about the late 1800’s.

Novel on your Nightstand:
Who/what are you currently reading?
Jeanne Dams’s latest mystery.

Whom would you cast as your Hero & Heroine if your book became a movie?
I’m so out of touch!  Can I hear from readers of the blog some suggestions?  Who would make a good brunette actress for an angst-ridden 17 year old?  How about an actor for an 18 year old Latino police officer? 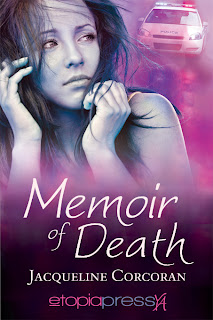 Can you change when you will die, or just the way you live?

Keira Alexander still hasn't made any friends in her new town of Cedar Heights, but at least she's snagged a summer community service gig at the Cedar Heights Police Department. Normally, all she does is busy work, but this time, she finds herself at the scene of an apparent suicide--Rhian Sullivan, a girl from Kiera's high school. But when Keira finds a trunk full of Rhian's diaries, she becomes obsessed with the life of the girl she barely knew--and with her death.

Because Rhian didn't kill herself. She was murdered. And the murderer does not want Keira to talk...

And...
You can learn more about Jacqueline on her
WEBSITE
Scribbled by Unknown at 6:00 AM