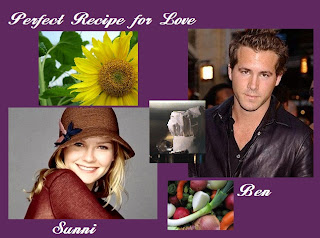 (my interpretation of Ben and Sunni)

Just discovered that I was tagged by Devon Matthews for a 777 Challenge. The challenge is to go to page 7 of your current work in progress and post at least 7 lines from the page, then tag 7 other authors and challenge them to do the same on their blogs. So, here we go.

My work-in-progress (WIP) is still a contemporary romance set in California. Ben runs "Ben There, Ate That" a bar and grill- one he's trying to "go green" with by hiring Sunni, who lives at the "Ripple on the Pond Commune" where they grow everything organic, to help him design and set up a rooftop garden for the restaurant. My 777 comes from the moment at the commune after Ben and Sunni first meet. Wolf, a fellow commune member who's close to her age and has a thing for her,weighs in on his instant dislike of Ben. This scene is only a few pages after the Six Sentence Sunday I shared today.


From Perfect Recipe for Love, Page 7

Wolf was three years her senior, the same age as her sister Autumn, but for some reason he had attached himself to Sunni from childhood. Now their parents’ teasing had grown to be the bane of her existence. If she wanted to do work outside the commune, it was easy to see why.

Wolf wouldn’t give her a moment’s peace.

If Autumn hadn’t already attached herself to another young man from a different family within the commune, this wouldn’t have been a problem. Her parents would have tried to pair Autumn with Wolf instead.

Sunni wasn’t sure it would have mattered. She was like a magnet for him and always had been. The idea of him touching her in any way that implied intimacy set the gag reflex into motion. He was like an older brother, dorky and not too bright.

“I don’t want to leave you alone. You are my Sunflower.” The words made her cringe.

Why had her parents insisted on naming her Sunflower with a last name like Fields?

“I am not your sunflower, thank you very much.” She dumped the manure into the compost heap.

“Oh, come on… you know I pick you…” The sticky sweetness of his words implied so much, but the warmth of his firm fingers grasping her hips and pulling her backside against him was where she drew the line.

Flailing, she ripped his hands off her hips. Sunni turned and pounded her fists into his chest.

“Would you take a fricking hint, Wolf? I want you to leave me alone.”

Holding up his hands as a sign of defeat, he backed away.

He marched away, disappearing into the barn and apparently out to the fields to see what the other folks were doing.

Sunni fumed as she shook the wheelbarrow out and then stomped off toward the creek.

Wolf had destroyed her perfectly good morning with his appearance. Not to mention he ruined the little sexual fantasy she had been building up in her mind about Ben Pryce.

The idea of belonging to any man sounded like a nightmare. Wolf didn’t get that she wasn’t his possession to play with. Communal living had many benefits, but becoming Wolf’s wife was one thing she didn’t see as a benefit at all.

“I’d rather be left for the coyotes…” She grumbled, squatting down to unlace her filthy boots.


Hoping they'll participate in the challenge and give us a really great 777 scene to whet our appetites. :D

Scribbled by Unknown at 5:26 PM

Great excerpt, Taryn! I love the name of his restaurant. :)

Thank you, Devon! glad you liked it. I think I'm almost done. Perhaps one more #1k1hr sprint tonight and I can "put a finish" on this one. ;)