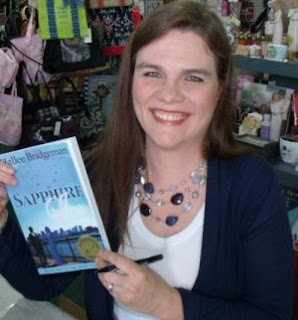 Please help me welcome a good friend, and fellow author, Hallee Bridgeman who is not only an amazing lady with a pretty popular blog, Hallee the Homemaker but she's also writes edgy Christian romances while balancing a busy life as a wife and mother of three.

What book(s) most influenced you as a writer?
I haven’t read her work in a number of years, but I used to devour every Nora Roberts that ever hit the stands.  I was recently compared to her, style-wise, in a review.  That really pleased me, because she kind of makes her own rules regarding POV and such, and it WORKS.

What book do you read over and over again?
These Happy Golden Years by Laura Ingalls Wilder

Tuesday Trio-
1)      Movie-  I have a hard time pinpointing favorite movies, because I immediately think of another one, then another one, and so on.  When I saw this question, the first things that came to mind were Aliens and Tombstone.  Not exactly the answer you expect from an inspirational author, but there you go.
2)      Music- I’m not a fan of music, per say.  If you look at my iPod, I have a few Christian pop bands like Mercy Me and Newsboys, but I prefer to have my radio tuned to a Christian talk station where I can hear sermons and Christian talk shows.
3)      Decadent Dessert- Chocolate slathered in chocolate and dripping with chocolate.

What’s the most interesting or bizarre bit of trivia you’ve learned from researching for a novel? An entire fleet of Spanish ships disappeared in a hurricane and have never been recovered.  They’re filled with gold doubloons.  Occasionally, one washes up on shore on the beach in Central Florida.

Novel on your Nightstand:
Who/what are you currently reading?  I have not read a piece of fiction in years.  But, after seeing The Hunger Games, I am fascinated to read what words would have produced such visuals.  I plan on reading that trilogy this summer.

Whom would you cast as your Hero & Heroine if your book became a movie?
I don’t know a lot about current pop culture.  If you handed me a People Magazine, unless Harrison Ford or Halle Berry were somewhere in the folds, I’d likely not recognize anyone.  That said, in Sapphire Ice, Book 1 of the Jewel Trilogy, the male Hero is very much Italian.  So, I did a search for Italian actors and found one who would fit the bill at least visually: Raoul Bova.
Robin, my Heroine, would be perfect if played by Anna Sofia Robb. 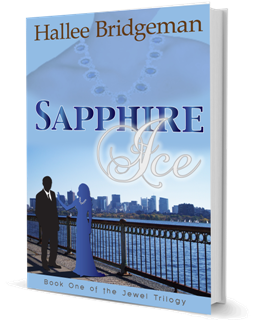 To Robin Bartlett, men were nothing more than violent users. After a hair-raising childhood, Robin and her two younger half sisters battled simply to survive. Determined to give her sisters a very different life from that of their mother; to never have to rely on a man for anything, she worked two jobs and put them both through college, while accepting help from no one. Her heart had turned to ice and she had no use for men or God.

Antonio “Tony” Viscolli had grown up on the streets, homeless. At seventeen, he entered a downtown church with the intent of casing it, but found himself on his knees at the altar. After being fostered by the youth minister, Tony followed God’s leading and eventually became a very successful and powerful businessman. In a fallen world, he was a gem.

When Tony bought the restaurant where Robin bartended, she immediately resented his intrusion into her well ordered, but exhausting, life. She suspected his offering her special attention and constant kindness was merely his way of expecting something from her in return, something she wasn’t willing to give.

You can find Sapphire Ice (and the other two novels, all available now) at
Amazon
Barnes and Noble
Smashwords
All Romance Ebooks

Wonderful interview Hallee. And of the three books my favorite so far has been the third Topaz Heat. But they all three have something special about them.
Hope you sell a million copies!!
Teresa R.

Thank you so much, Teresa.

I really enjoyed being here today, Taryn! Thank you for having me!

Glad you joined me today Hallee! Can't wait to have you back again when you have your next new release.