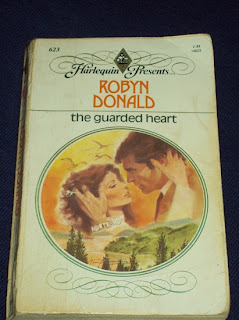 His was a terrible vengeance

Alannah's thoughtlessness when she was sixteen had caused an accident with tragic consequences. Then, three years later, when she'd finally come to terms with the past, she was painfully reminded of her guilt.

Nicholas Challoner, haunted, brooding for his dead wife and unborn child, was not a man to forget- or to forgive.

He demanded a retribution that only Alannah could pay. and the elaborate web he had woven as part of his revenge left her no way out!

This might very well have been the first grown-up romance novel I ever read, at my mom's suggestion. She said, "Here, if you want to read a good story, read this one."

Mind you, it was a story of a forced marriage, arranged by the hero, who's wife and unborn child's deaths were the fault of a naive, careless young girl- our heroine. She's older now, but returning from her formal schooling and hoping to reunite with her boyfriend. Her father has passed away and her mother and sister are broke- living a facade. When the young man she loves is offered a chance to further his career to becoming a doctor and leaves the country, she's faced with only one option- marry Nicholas and he will keep her mother and sister living in the lifestyle they are accustomed to and save them from the public shame and humiliation.

Little could Alannah know that Nicholas' reasons are not as vile and heinous as she believes, but without a true understanding of the man, she loathes him and wishes she could truly hate him for forcing her to fill the empty spots in his life that she stole from him- the parts of wife and mother of a child. After consummating their marriage of convenience, Alannah does get pregnant, but because of her internal struggle between loving and hating her "husband"- she nearly withers away during her pregnancy to the point that her anger sends Nicholas away.

Though the plot devices are old-fashioned (1983, for goodness sake), I still love this story and I bawl like a baby every time I read it. No matter what, it will always be one of my favorites.

Harlequin Author Page
Scribbled by Unknown at 6:00 AM