Fun Feature Friday- The Most Intimate Wish by F.L. Bicknell 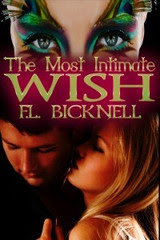 Warning: Graphic language and adult situations; intended for age 18 and over.

All she wants is a husband and family. All they need is for her to believe.

When Dinah and Jeff move in to be the Wheillercarts’ companions, their lives change for the better and the worse. Dinah loves Jeff, but after five years together, he still refuses to marry her, and Dinah’s dreams of starting a family begin to crumble. Regardless of their hot lovemaking sessions, she fears Jeff is cheating on her. Dinah will do anything to keep Jeff, even if it means sharing him with another woman.

However, strange occurrences and a seemingly psychic landlady keep Dinah guessing about her life and relationship with Jeff. And what about the bizarre statue in their landlady’s atrium? Little does Dinah know it holds the key to her most intimate wish.

Author Bio: Faith Bicknell’s work (also known as F.L. Bicknell) has appeared in a wide range of genres such as Would That It Were, Touch Magazine, GC Magazine, Ohio Writer Magazine, Waxing and Waning (Canada), and The Istanbul Literature Review (Turkey) just to name a few. Faith was a regular contributor to Gent under her pseudonym, Molly Diamond (www.MollyDiamond.com), which she has resurrected and now writes as Molly for her SFR/fantasy titles.

She has also had fiction published in Hustler’s Busty Beauties, Penthouse Variations, Twenty 1 Lashes, and was a regular contributor to Ruthie’s Club for three years. In addition, Faith has many e-books and some print titles published under various pen names with a host of different publishers.

For two years, Faith served as the co-editor of The Tenacity Times and she served as the managing editor for two e-book publishers for thirteen years combined until she resigned in 2009 to focus on her writing career. http://faithbicknell.com/