♫You musta been a beautiful baby♫
(I honestly don't know what happened. LOL) 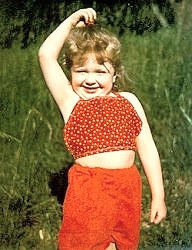 As an exercise in futility, I'm making a blogging schedule and tentatively, Mondays are now going to be "Memory Lane Monday." Each week, I'll post either, pictures from my childhood along with stories of things I remember fondly from my past, or perhaps favorite toys, foods, experiences, places, etc. Some things will probably be fairly obscure, possibly non-existent anymore. Most the toys I grew up with have faded like the old Polaroid photos and book pages, but I want to share things about my life with my readers, fellow writers, family and friends. Sometimes things from childhood disappear for a while, when they get stuffed into the files that represent "non-essential" memories once you're grown. I believe though, that even those memories are part of what shapes us and makes us who we are. 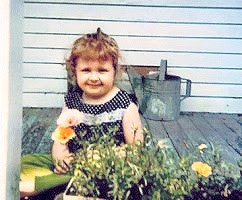 The 70's were good to me I suppose and I used to get compared to Shirley Temple a lot as a child because I had a lot of curls in that red hair. My mom repeated the "There was a little girl, who had a little curl" often. I remember being asked to sing "On the Good Ship Lollipop" a lot, as well. Of course, I remember standing on my grandparents couch and my grandmother smiling at me as I sung my version of "Here Comes Petter Hoppingtail." Somehow cotton and hopping were equivalent back then to me. ;) 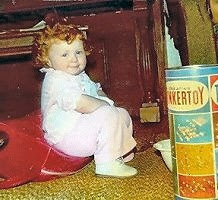 At this very young age, we lived not that far from my grandparents, just down the road really, though from my perspective, it felt like we lived miles and miles away. We had to cross a bridge for goodness sake! It was a small bridge over a creek, but hey, that seemed huge at the time. Even when I was a baby/toddler, we went to my grandparents every Saturday. When I was big enough to run around and talk and my grandma would take us home, I'd run out to my swing set and beg my grandma to "Watch me slide, Grandma! Watch me!" as she got in her car and left. 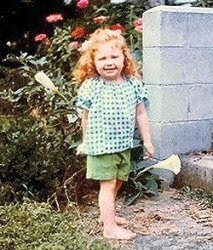 The place we lived was called "The Ripy Place" to us, as it had belonged to the Ripy family. My mom loved her moon flowers and I remember my dad mowing the yard in a circle once. Meanwhile, my cousin Bubba (who was a grown up) and I gathered the grass clippings and built rooms and walls so I could play with Little People or something, pretending it was a house with lots of rooms. Maybe we used our fingers to "walk" through like the legs of the people. I can't remember it that clearly, but I do remember it. I remember my cousin Ray(also a grown up) falling off my swing set (though I have seen the home video my dad recorded from that day, though you don't actually see him fall), while I was splashing around in my pool and my mom was nearly due with my baby sister. I had a bunch of little wind up toys that "swam" through the water- fish, dolphins or something- you wound them up and their flippers paddled them through the water. My mom says we got those that day at the Dish Barn. I also had a fat plastic fish and what I remember most about it was that it was bright yellowish orange and red with big puckered up lips and fancy flashy eyelashes.

I have a lot of memories from The Ripy Place, even though I only lived there until I was 3 or 4 years old, including the night my mom sat on her bed, which was covered by a chenille bedspread and explained that I had to go stay with my grandparents because she was going to have my sister. I wasn't even 3 1/2 yet, but I remember sitting in one of my little red chairs- it was either the red swivel plastic one or the small red wooden rocker, when she told me the baby was coming soon. That night it stormed that night. Because it was the end of July, my grandparents didn't have any of their winter stoves out, so they simply had a tin pie pan covering the chimney hole. One of my uncles got drenched in rainwater and black soot when it flushed through the chimney and spewed out the hole because of the downpour.

I picked wildflowers out by the road near my grandparents mailbox with my aunt, and even all these years later my mom still teases me about the fact my dad took them to her but they were filled with fleas! The brightest memory from that time? Going with my dad and my grandma to the hospital the day my mom and my sister were coming home. I was too young to be allowed in the maternity ward, so my grandma and I went to the snack machine and got a Hershey's candy bar and a Coca~Cola while we waited and then once we were in the car, I held my sister all the way home in the front seat.

It was 1978 after all- children's car seats were available but the laws were not strict at all.

Till next Monday~ Have a great week!
Scribbled by Unknown at 1:00 AM