I Have The Touch

Kindle Touch, that is....
pictured below
with cover of Suzanne's Late Harvest,
which is the first book I read on my Kindle. 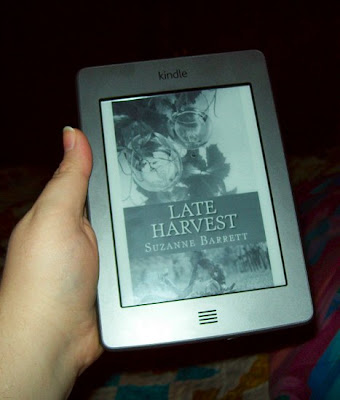 I received some money for Christmas, so I did the unthinkable- well, at least for me- I bought a Kindle Touch, along with a few new eBooks. I had already been using the Kindle for PC app on my laptop, so this was just a natural progression that I knew I would eventually succumb to.

As a writer who has always valued the weight of a real book in my hand, the crisp rustle of the pages, the smell of the ink, or better yet, the aged aroma, of a book, I find that print books fill me with this mystical sense that "all's right with the world." The idea of reading books on the computer or an eReader was a foreign idea that, for a long time, I refused to surrender to. I'm not a huge fan of change, so it took a while for me to warm to the idea.

I grew up in the 80's & 90's, when eBooks were not commonplace, or least, not on my radar at all. Heck, my parents didn't even have a HOME computer until I moved out when I was 20. The very idea of reading a BOOK on the computer was as foreign to me as going to Russia or China or Japan. I did NOT speak the language and some ways I just didn't want to. I wanted to cling to the traditional mindset of what constitutes becoming a published author.

See, what I understood was my Smith Corona word processor and my 3 1/2 inch floppy disks that housed my stories and which I took for granted, not always saving backup of what I typed. At some point, ol' Smithy gave up on me and started acting wonky, corrupting my disks to the point that printing out saved files looked like alien transcripts from Planet ShouldaPrintedThatOutToBeginWith.

Meanwhile, all a young writer like myself dreamed of was seeing my stories in print, of grasping it in my hands in the middle of Joseph Beth Booksellers or Waldenbooks, Barnes & Noble or Borders... or even my beloved Little Professor in Frankfort, Kentucky, which no longer exists. In fact quite a few of those brick & mortars are disappearing now and it still saddens me.

I eagerly looked forward to being able to say,

"Whoa! This is utterly fantastic! It's real! LOOK! This is MY book!"

I grew up longing for that moment. Whether the book succeeded was another story, but that first taste of personal success was borne of my love for reading and the sense of satisfaction of holding my creation in my hands, of whisking through the pages for a favorite passage and feeling that, once in print my words and a story of my heart that I loved so much would be immortalized- captured for eternity and solidified in those pages of that binding. And others might read it and glean some joy and happiness from something that came from ME and my heart.

I knew of Amazon and I remember when it was just about "books" but of course, in this quickly changing landscape of technology, eBooks were just becoming more the "norm" at the same time I started to come into my own as a writer and that hit on a very personal level. I had put my writing on the back burner for a decade after Smithy's demise. I think in some ways, I wondered, what's the point if all my hard work is wasted on computer technology that I can't trust? My word processor wasn't much more than a baby version of computers and I'd be damned if I'd trust saving my writing on anything like that, not without printing out huge stacks of cumbersome pages, just to be sure nothing was lost if my computer got sick on me or files were deleted by accident.

Of course, I've warmed to the idea of eBooks more as time has gone on. I've been growing as a writer and a reader, just as eBooks are growing in the publishing industry by leaps and bounds. I'm excited that my first novel will be available in both eBook and print versions. I feel the meshing of the two worlds as they have collided with each other. I don't think print books are the dinosaurs who will become extinct, but I do believe they have to make room for their modern day descendents because change happens and much as we might not like it, it's usually a good thing.

I want to believe that they can walk hand-in-hand in the business though and for me, buying my Kindle Touch didn't change my views about reading books completely in eBook format. There are still some authors I will always read in print, so long as their books are printed. One being Yasmine Galenorn, though I did buy her novella Etched in Silver for my Kindle, even though I already have it in the print anthology it was originally released in, but that's because I LOVE that story so much I wanted access to it no matter where I am.

So yeah, there are certain book series I will buy in print vs eBook, but I did discover that Kindle has amassed a great collection of "free" books- a lot of them classics, some I've read and some I've always wanted to read, so I downloaded a bunch of those (Jane Austen, D.H. Lawrence, H.P. Lovecraft, etc) as well as books by my fellow authors or authors I've recently discovered.

All in all, I can't believe how much I'm enjoying the freedom my Kindle Touch gives me, to read books away from the computer in a way that doesn't feel like I'm reading on a techie device at all. Much as my former "print books only" self would disagree, I have to say that my purchase was well worth it already and I have a feeling I'm going to enjoy it for a LONG time to come- especially knowing I can tote my "eLibrary" with me anywhere without lugging a dufflebag full of books and yet I'll never be at a loss for some good adventure, mystery or romance. Yeah, that's what I call having the touch.
Scribbled by Unknown at 11:56 PM

I love my Kindle and like you, I never thought I'd really enjoy it. But I do.

I've put (or should I say bought) all my books on Kindle. Why you ask? Because when I'm out and about and someone asks me what I'm reading, I can mention the book and author. And then in the same conversation (as they tell me what books they are reading) I can mention that I am an author and show them that my books are also on Kindle. Great for when you don't have bookmarks on hand.

Taryn:
It took me a while to purchase a kindle too. Though all my books had been released in ebook format I still loved the print editions better.
Now that I've finally bitten the bullet and purchased the ebook reader. I downloaded all my own books into it to keep.
With numerous other favorites as well,of course.
The good things about ereaders is you can take them anywhere. They weigh next to nothing and they can hold nearly 4000 books, about half the collection in print that I have at the house. Imagine 4000 books I don't have to find a place to shelve!!!
Oh my.
Teresa

I'm with you all the way in this. Just got a Kindle for Christmas and loaded my first book last night as a matter of fact.

Thanks for stopping by ladies-

Indeed Renee, part of my thinking when I ordered it was that I would be able to have my book on there and even my sister has already asked if I would have mine on there already when I come in for spring break. The fact that Castaway Hearts will be out the week before I go up to visit my family, I'm pretty sure I'll have loaded it up. ;)

Teresa- I know what you mean. I already have a few bookcases that are plumb full of books- I know my TBR pile just grows more and more now though, but its not taking up as much shelf space here either!

Thanks Krista! And Jennifer, I know! It was an exciting purchase for me. I have over 100 on there already! LOL But then, some were purchased within the last year for the Kindle for PC, so they simply transferred once I registered my device.

I bought a Kindle last summer and enjoy it immensely. It's nice to be able to download several books to take on trips rather than having to pack them. I also take mine to work with me to read during my lunch break. I still love physical books, probably for the same reasons you do, but they do take up precious space. All of my novels are now in e-book format including The Touch. Perhaps I should come out with an updated version to include the Kindle Touch! Happy reading!

It seems most of us can relate to that resistence of buying an e-reader. We want a book in our hands, probably because we've dreamt for so long of having our own books in print. But your right, it's nice to have the best of both worlds. I have a Nook, but I still lean toward my print TBR pile before I go to my e-reader list.