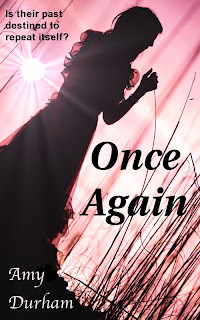 Click image above for Amazon Print version. Other buy links are listed at bottom of the blog.

Please join me in welcoming Amy Durham to my very first Tuesdays with Taryn. Amy is a fellow KYRW chapter-mate, debuting her Indie-pubbed first young adult novel, Once Again.


What book(s) most influenced you as a writer?

First and foremost, “Fair Haven”, by JoAnn Ross. I’ve always been an avid reader – and I’ve loved writing since the 6th grade – but it was Ross’s “Fair Haven” that said to me, “You can do THIS, and you SHOULD do this.”

What book do you read over and over again?

Well, aside from “Fair Haven”, I also re-read “Jewels of the Sun” by Nora Roberts. And yes, I’ll admit it, I re-read the “Twilight” books! I think they really demonstrate the cross-over appeal of Young Adult fiction.

What’s the most interesting or bizarre bit of trivia you’ve learned from researching for a novel? It’s not really bizarre, but I was surprised to learn that many Maine residents don’t have air conditioning in their homes. Their summers are short, so a lot of folks don’t think they need them. My cousin Adrienne was my “research” for ONCE AGAIN. She moved to Maine from North Carolina when she got married, and it was her opinion that an air conditioner was, in fact, necessary… even in Maine!

Who/what are you currently reading? “On Lavender Lane” by JoAnn Ross. Yes, I’m a BIG fan of hers!

Whom would you cast as your Hero & Heroine if your book became a movie? I always picture Layla Bradford very much like Emma Roberts, who played Nancy Drew. She’s a very “natural” beauty. And I think Logan Lerman, who played Percy Jackson, would make a perfect Lucas Ellis! He’s got that “boyish charm” I always imagine when I think of Lucas.

Reincarnation sucks! Unless it comes with a cute guy. That’s what sixteen year-old Layla Bradford discovers when she moves to Sky Cove, Maine, a small-town she thought was ordinary, but turns out to be an episode of “Cold Case” on steroids. Layla doesn’t want to fit in; she wants to blend in and stay out of the spotlight. But the spotlight is where she winds up when she catches the eye of school cross-country star and all-around-nice-guy Lucas Ellis. She quickly learns there’s more at stake than high school reputations when she and Lucas discover they are the reincarnations of a young married couple from the mid-1800s who suffered a horrible tragedy at the hands of a madman who was never brought to justice. After a series of frightening visions show Layla and Lucas glimpses of their past-lives, they realize that the villain of their previous existence has also been reincarnated, in the form of a fellow high school student who targets them with teenage pranks that soon turn dangerous. As they grow closer, will Layla and Lucas be able to uncover the truth in time to stop the same tragedy from unfolding once again?

You can also find Amy at her website/blog-
Amy Durham
Imagination & Escape for the young...
and young at heart

Thanks again for visiting today, Amy! So glad to have you on!
Scribbled by Unknown at 6:00 AM

Thanks for the invitation to come hang out!

Glad to have you visit!

Oh, and I forgot to mention!-- I finished reading Once Again over the weekend. LOVED IT! I honestly cannot wait for the next book to find out WHAT else is going on in Sky Cove!