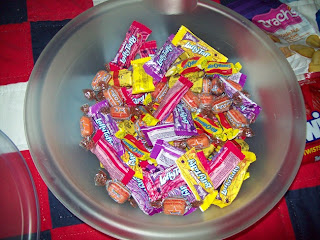 One of the essentials I've always had on hand during NaNo is snacky things, especially AFTER I quit smoking 3 years ago. Usually it was gum, mini candy bars, especially Reeses cups and chocolate in most any other form, etc. I mean, really, the day after Trick-or-Treat- who doesn't have some candy just lying about all over the house? I have kids and even if they hide it, I'm like a bloodhound, with a nose for the sweets. I can sniff it out, Sherlock Holmes style.

This time around though, I thought I'd curb the chocolate, which I could probably demolish in the first few DAYS of NaNo and instead opted for some old-fashion candies- Chick-O-Stick, Bit O'Honey and Mary Janes. I also snagged some Laffy Taffy because I can suck on a piece of that for quite some time and be happily typing away without realizing it.

But I also grabbed some Brach's Maple Nut Goodies, Trolli's Peachie O's, my all-time favorite chewy Twizzlers and Gummi Bears. Now mind you, I've come to realize that I prefer Gummi Worms to Gummi Bears and you might ask why- well, the bears seem tougher to me and after a while, I just kind of get tired of picking arms and legs out of my teeth. I don't have that problem with worms, as they have no arms or legs to speak of. ;) 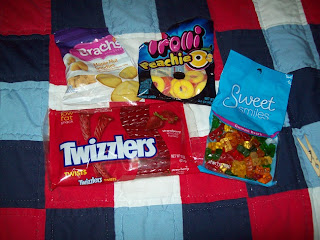 On top of the sweet treats, I've also got honey roasted peanuts and this weekend's grocery day, I intend to find some Chex Mix to add those into cause occasionally I do need something salty. I've also got some knock-off Teddy Grahams as well. In the fridge we have fruit cups and string cheese, and I'm pretty sure I have some microwave popcorn, too, so I don't think I'll be at a loss for things to nibble on.

Truth is, the supply is great and I will eat some of it, but often times I find myself so deep into the writing, once I really get going, that I forget I even have the snacky foods around. In the meantime, I guess my bedroom will just have to smell of all the sweet treats and old-fashion aromas of a candy shoppe as I step on the gas pedal and gun it down this writing highway.

I probably won't be around much today as I hope (fingers & toes crossed) that I will blow my word count out of the water and get a LOT written but I will try to update word count on my Widget in the side bar each day. Hope you get off to a great start if you're participating in NaNo as well!

What snacky items, if any, do you like to keep on hand as you write- during NaNo or any other time? Would love to hear from you! Leave a comment below and tell me about your favorites!
Scribbled by Unknown at 6:00 AM

Great idea about the snacky items. For me, I'm a coffee person (or I might do a tea). I need that "drink" so to speak.