Please help me in welcoming fellow author E.B. Walters to Thursdays with Taryn. Keep reading to find out more about her and also go check out the contests she has going on her blog and Goodreads (see below)
What book(s) most influenced you as a writer?
I’m an avid reader who reads everything from Tom Clancy and Robert Ludlum to contemporary, paranormal and urban fantasy romance. I started with Janet Dailey way back…hehehe, way, way back, Amanda Quick, Jude Deveraux and Johanna Lindsey, but the author whose works I loved the most, moved me to tears and made me run to the store to buy her next books was Jude Deveraux.

What book do you read over and over again?
Whitney My Love by Jude Deveraux

What’s the most interesting or bizarre bit of trivia you’ve learned from researching for a novel?
In almost every mythology, from Europe to Africa, Americas to Asia are tales of giants who once roamed the earth and either fought for the good of mankind or with the demons. Makes you wonder.

Who/what are you currently reading?
Touch of Death by Kelly Hashway (an ARC)

Whom would you cast as your Main Characters/Hero/Heroine if your book became a movie?
Hmm, FOREVER HERS, I’d have Eliza Dushku as Amy and Channing Tatum as Eddie

FOREVER HERS (book 5 of the Fitzgerald Family) 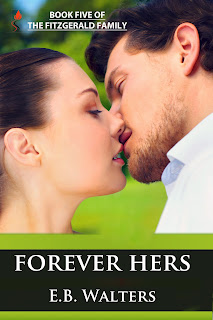 She wants her past hidden...

Amy Kincaid is running from her controlling ex-husband, who will stop at nothing to find her. With a new identity and a new job as a housekeeper, she just wants to be left alone to raise her daughter. Then Eddie Fitzgerald rolls into town and turns her world upside down.

He’s in the business of exposing the truth...

Eddie Fitzgerald, L.A.P.D.'s finest, lives for his job and nothing else, until he decides to take a break at the family summer home and is held at gunpoint by the most annoying, sassiest woman to ever cross his path. But something is off about Amy, and the more he learns about her, the more he’s convinced she’s a fugitive.

When her past catches up to her, Amy has no choice but to trust Eddie. Unfortunately, Eddie has demons of his own, and struggles with the decision to protect her or uphold the law.

The truth takes them down a deadly path, and only love can save them.

You can find out more about E.B. Walters on her
Website
Blog (contests ongoing)
Goodreads


You can find her books at the following-
Amazon
Barnes and Noble
Smashwords
Scribbled by Unknown at 6:00 AM

Thanks for having me and featuring my latest release, Taryn

You are very welcome Ednah! Glad to have you visit!