I Knew a Brave Soul Who was a #Miracle on Earth 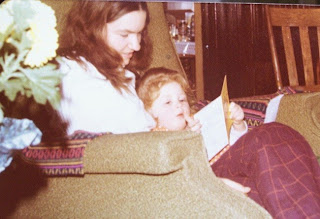 (Left: me with my Aunt Debbie when I was maybe 2-3 years old)

I just lost someone very special in my life this week. My mom's baby sister, my Aunt Diggy- as I called her until I could pronounce Debbie. After that she became my Debbie Roses (though her middle name was simply Rose). My memories of her are always of a vibrant, outgoing, caring young woman.

When I was growing up, she was just as much a role model for me as my mom and my cousin Carol (who I call Bubba). I always associate the three of them with the 3 Musketeers- "All for one and One for All"  because though two were sisters and one was not, they were thick as thieves.

I wouldn't trade these three women for the world because a lot of the fabric of who I am is woven from the things I learned from them about life and love, so this is a very sad time in my life. In some respects, I probably chose my pen name because of her. Raye is my middle name, but she always called me "Miss Raye" when I was a kid. 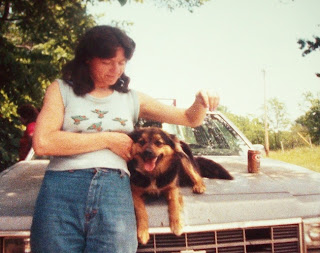 Somehow I think that was in the back of my mind when I chose Taryn Raye as my pen.

Growing up, we spent almost every Saturday down at my grandparents' house and my aunt still lived there with them. I remember walking along the edge of the road near the mailbox with her to pick flowers for my mom when she was in the hospital having my baby sister when I was three. And I've heard the story a hundred times how the flowers were full of fleas and my mom had to throw them away. I will continue to tell that story to my daughter, so that it keeps the memory alive.

From the time I was old enough to stayed overnight at my grandparents, I slept in Debbie's twin size bed with her as well as a few cats and dogs. Staying all night at Thanksgiving or during winter months was brutal, as her room didn't have a coal or wood burning stove, so we were piled up beneath electric blankets and stacks of quilts. If you had to get up in the night to use the bathroom you'd better hope you had thick socks on to keep your bare feet from smacking the ice cold wood floor that only had a few scatter rugs. Brrr.... 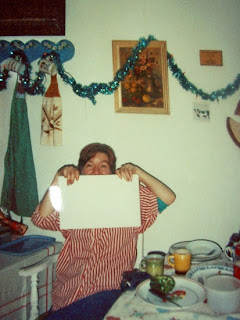 I remember climbing over old car bodies in the junk yard with her to go find a can of liniment for a cut and helping gather eggs from the chickens. I remember her insistence on saving a little runt out of a litter of pigs and naming him Wee Willy and putting him in a pen out behind the house. I'd run straight through the house every Saturday to go bounding out the backdoor to see him and he'd run up and down the wire fence like a puppy excited to see his playmate.

She and I spent a lot of time doing adventure scavenger hunts under rocks for roly-polys and ants and other things in wildlife that she thought were interesting and it created in me a sense of wonder about nature and the world around me. I learned about the life cycle of mosquitoes standing on an upside-down slop bucket while peering over the wooden beams of the cows' stall— Cows she had named Fred and Barney, much to my grandpa's dismay. (As he would have said- you don't name it if you're going to eat it.) 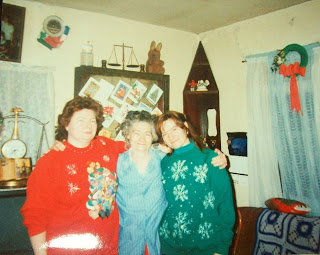 She shimmied up apple trees at my grandpa's urging to get me little sour green apples to eat with salt and scared as I was (am) of wasps and stinging bugs, she'd never kill one. She would catch it in a jar or a cup and release it outside. "They're just as scared of you as you are of them," she would always tell me. (I'm still not sure I believe that when I get dive-bombed by a wasp in my house. LOL)

She loved the horses, mules and ponies my grandpa had and I remember when Big Kurt (the largest red mule I'd ever seen) kicked her and bruised her up badly. I remember when she worked at the Dollar Store and would pick us up a box of Fiddle Faddle when I'd ride with my uncle to go pick her up from work.

The majority of my time at my grandparents' was spent in her room, playing dress up with her make-up, pretending her bedroom was my grown-up apartment. I sat in front of the dresser with the large round mirror and put on lavender eyeshadow and pink blush and painted my nails with her Love My Nails "Candy Kisses" iridescent pink polish. 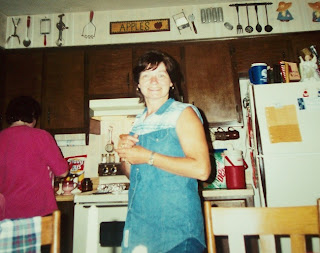 (Left: when she was in for a visit once)

I listened to her record albums. I read her short story about a young woman who was trying to take care of the farm and her brother after their parents died (she wanted to be a writer and that inspired me) and I typed things on her Brother typewriter. I rifled through the books on her book shelves. In fact, that's where I discovered V.C. Andrews' Dollanganger Series- Flowers in the Attic and the other 3 books scared the bejeebers out of me, but I loved them. My momma had to MAKE me give them back, but then Debbie turned around and gave them to me because she didn't plan to read them and she knew how much I loved them.

My aunt was kind, loving and nurturing, always caring for strays and runts and things that she didn't think could fend for themselves. She married and moved away to western Kentucky before I was grown, but we always looked forward to her visits "back home" and it was cause for celebration. She was like sunshine bottled in human form and could brighten and cheer you up, even when it didn't seem possible. 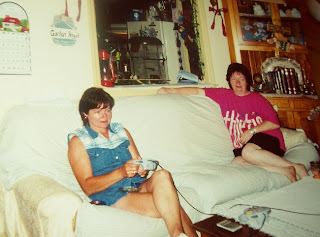 My aunt wanted children, but by the time she married and tried, she discovered she couldn't have children because of Endometriosis. Still, she took in cats and dogs and birds and loved them as her babies. She taught me how to do plastic canvas and other crafts when I went down and spent a week with her one summer when I was maybe fifteen or sixteen.

That was before the accident when she fell into the glass china cabinet doors and lost so much blood before the ambulance got there that we almost lost her. Though she lost the feeling in her left hand, she did learn to live with her disability rather than letting it hinder her.

The most devastating blow came in 2004 when she started having problems with her speech, memory and had swelling in and around her eye. It turned out to be a brain tumor, Stage 4 and though they were able to operate and remove the mass that was causing the swelling and motor skill issues, they weren't able to get it all. In fact, the doctors never gave a time frame with which to base her life expectancy because at Stage 4, as bad as it was, even with surgery and aggressive chemo and radiation, the doctors didn't think she would survive.

This is how I know I knew a brave soul who was a miracle on this earth. She stuck with the chemo and radiation though it made her sick as a dog and not always as strong as she tried to be. She adapted to a diet, that though odd to most everyone else (black olives with their juice and buttermilk for breakfast, for example) that nourished her and fed her body and kept her at a healthy weight. She had faith and hope and she survived. She locked horns with the cancer and she was winning. Well, winning as well as you can when cancer is that far gone.

So this is in memory of my aunt—Rest in peace Aunt Diggy, knowing we will love you always and will never forget your bravery, your strength, your faith, your smile or the size of your heart.

When diagnosed with brain cancer, the doctors gave her no time frame. But she was blessed with time, as that was 8 years ago and we were also blessed to get to keep her around that much longer.

We love you and will miss you~Forever and always yours~ "Miss Raye"
Scribbled by Unknown at 6:00 AM

Absolutely beautiful. I lost two wonderful relatives to cancer in the past few months. I know how you feel. My thoughts and prayers are with you, always.

She was definitely a miracle in your life. You were very blessed.

What a beautiful remembrance. I'm sure she would have been proud of inspiring you as a writer if she could have read that.