Friday Spotlight- My #Review of South of Bixby Bridge by @WinfieldRyan 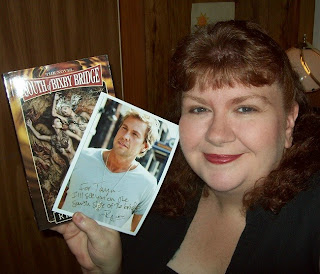 (me with my autographed print copy of SOBB, along with a signed photo)

Blurb:
Fresh out of drug rehab, an ambitious, young stockbroker struggles thrugh the holidays with much more than sobriety when he is seduced into a high-finance game of sex, deception, and blackmail by a charming, sadistic San Francisco hedge-fund onwner and his intoxicating wife.
Warning: This novel is an unfiltered account of a young man's struggle to overcome addictions and it includes some graphic language, descriptive sexual scenes, and adult situations.
***
I usually don't post reviews necessarily, mostly because even if I snatch stolen pieces of time away from my own writing to read, I don't usually have time to also write a review, but this was an exception. I spent hours and days after reading this, still thinking about the story and the character and still crying over it. I knew I wanted to share my thoughts on this novel. Here is my Amazon review from July 10, 2012 - which I gave 5 Stars.
Amazon Kindle

It's been a long time since I've read a book that moved me the way South of Bixby Bridge did. Even now, my heart aches for Trevor and not just the journey he traveled to sobriety, but also the lies, deceit and horrors that drove him to the bottle and the drugs and the crazy lifestyle he grows accustomed to as it becomes clear he doesn't have a lot of choice in his own life, driven so much by his own illness.

I do believe this has to be one of my new favorite keeper novels. Ryan does an amazing job with vivid description in such a way that you, as a reader, are sucked right into the life of the main character. As a writer, I aspire to the same in my own writing, so his feat inspires me further still to hone my own words in a way that reaches in and clutches at the heart of the reader.

I read this novel in two days time, sobbing my way through the last several chapters as the truth behind many of Trevor's issues bubbled to the surface just as the problems in his current situation also culminate into a full circle of his fears, his problems and finally the beginning of his healing from the deep dark secrets of his own past.

This is an exceptionally brilliant and vivid novel which I enjoyed and plan to enjoy for years to come. Love it! I could totally see this book being made into a feature film.