Short, Sweet and To the Point

As with all the ones before, the story still needs to be finished, (about 25-30K more to go) but I've been sick for nearly 4 days and I need some down time to get better.

Right now it's like I've got a drainage reservoir in my head that could turn into Niagara Falls given the right circumstances. Hot tea and honey has done little to reduce the congestion. Neither has my NetiPot and my ears are still clogged up, though my throat is not as sore as it was the first day or so. Now it's mostly just the furnace between my ears and an achy body to go with it, but so far as I know, no fever.

Think I deserve a little down time though. A hot shower might help do the trick, though a soft serve from Dairy Queen might make me feel even better...any takers on whether I could talk my hubby into driving 15 minutes to town and back again to get me one? LOL It'd be melted into sweet foamy milk by the time he got back.

Anyway....off to shower and then rest..maybe fill out the rest of my Christmas cards and hopefully I'll feel up to my own personal reward for accomplishing NaNo this year-

I got the book just before NaNo and normally I devour them in a couple of days, but I promised myself I would accomplish NaNo first.

Besides, I need to get it done before the ARC of Blood Wyne arrives (the next book after HH) that I won from one of her blog contests. So excited to get to read it before it's even out on shelves! Thanks Yasmine!

Off to pamper myself back to good health! Have a good one!
Scribbled by Unknown at 3:13 PM 1 comment:

My Hero is the Sexiest Man Alive

Yes, I modeled Ben Pryce and his twin brother Nick (whose story was the previous one I wrote) after Ryan Reynolds. 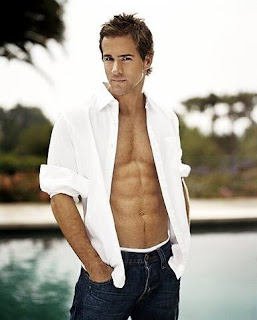 See, I just knew that there was a reason Ryan had to be cast as my twins...I figured out a way to hang onto that image through two manuscripts.

He's not just sexy, but he's funny and sweet and well...just yummy to think about. ;o)

I've been *casting* actors & actresses for my characters for a while now and this was the first time I had twins to write. Ryan fit what I needed for each character.

One brother is a softhearted romantic artist, the other a loud playboy chef. Can you guess which one I'm writing now?

Yeah...Ben hasn't exactly been reformed yet, but he's on his way already.

I just hope he doesn't lose his sex appeal, because he's naughty, but that's what makes him so good. He just needs a little heart to go with it and Sunni is the missing ingredient. She's earthy and open, but also has never been in love and swears she's not ready for it. Actually, she has sworn it off because she doesn't see herself as the marrying kind to be tied down to any man.

Too bad that's where this road is taking them! LOL They'll thank me for it later.

Off To a Slow Start

I love my characters, don't get me wrong...

And I know they have a great story to tell me...

But I just find myself dawdling all during the day when I have like, ALL THE TIME IN THE WORLD TO MYSELF....and then find myself making a mad dash to pump out the minimum words before I go to bed after the rush of homework, supper, baths, etc. I've been staying up three hours past my regular bedtime to write. For some reason, that seems to be working for me rather than trying to concentrate on it during the daytime- like right now.

I'm tempted to turn my days around, at least for the month of November- of course, I'd still get up and get the kids off to school at their regular time, but it crossed my mind last night that I seem to write better in the evenings on this one. Perhaps I might be better off to go back to bed after the kids are gone for school and sleep until hubby gets home mid-afternoon.

Then I could still get my rest, be up with him and the kids until they go to bed, and still be able to stay up a bit longer to write once they're all in bed and the house settles down around me.

But, I have a routine and I hate to break it, even though I am breaking it bit by bit as this week wears on.

Perhaps a bite for lunch and then solid concentration would help along with a little soundtrack to help me along.

I spent most of the day fleshing the hero and heroine out so I knew more about them, but all said and done- I'm going to bed almost a couple hundred ahead of the minimum daily word count to make 50K by month's end- 1,840 (min= 1,667)

Feels good. Tired being that I'm not used to being up at 11PM. Will have kids home tomorrow, so we'll see how THAT goes...LOL

See you on the other side of sleep my friends!
Scribbled by Unknown at 12:05 AM No comments:

It is officially the first day of NaNoWriMo. Woohoo!

This year I'm revved about doing NaNo, though I haven't yet started writing. Instead, I tackled the dreaded dishes so I don't have fool with them later and put up laundry.

I'm also thrilled to say that I stayed up a little past my bedtime last night and FINISHED the WIP I'd been procrastinating over. Yay!

Right now, I'm the process of fleshing out my characters a little better and plan to get started soon.

Yeah, it's going to be a GREAT day!

Put those fingers to the keys and join me!
Scribbled by Unknown at 10:55 AM 1 comment: