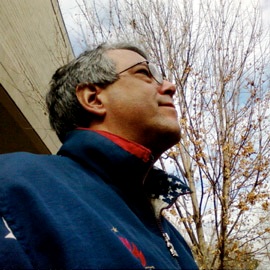 Please help me in welcoming Larry Kollar to Tuesdays with Taryn today!

What book(s) most influenced you as a writer?
It's easy to say Lord of the Rings, but it's true. Tolkien's Middle-Earth was a masterwork. He built on familiar tales and myths, and created something entirely new that readers could still understand. The characters were much the same—different but familiar. I've always been a sucker for excellent world-building.

What book do you read over and over again?
The Red Mars/Green Mars/Blue Mars trilogy by Kim Stanley Robinson, usually in the winter. Another great example of world-building, except that it's the characters doing the building (or terraforming). They go beyond the relatively easy task of creating an ecosystem, and tackle tougher questions like “how do we want to relate to each other”? It can be seen as a metaphor for the writing process.

What’s the most interesting or bizarre bit of trivia you’ve learned from researching for a novel?
The Georgia Guidestones — is a 2-hour drive from my house, and some call it the “American Stonehenge.” Only one person knows who had it built (besides those who commissioned the work, of course), and he agreed to carry the information to his grave.

Novel on your Nightstand:
Who/what are you currently reading?
I'm in between at this moment. I just finished Jumping at Shadows, my friend Helen A. Howell's first novel. It's a fantasy for middle-grade readers, about a girl who grows up seeing shadows watching her all the time. She soon learns that her ancestry isn't completely of Earth.

Whom would you cast as your Main Characters/Hero/Heroine if your book became a movie?
Wow, I'm not up on the teen stars at the moment. I'd like to see some unknowns step in and see them interpret Cody, Sondra, and Kelly.

Though the book is not out yet (should be less than 2 weeks from now) in the meantime, you can learn more about it on the White Pickups Goodreads Page. 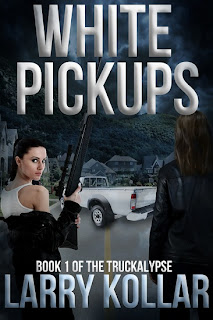 “Legends are about ordinary people who stepped up and did what had to be done.”

At summer’s end, mysterious white pickup trucks take to the roads and compel nearly everyone to “drive off.” Some of those who remain gather in a suburban Atlanta subdivision, and struggle to cope with a world whose infrastructure is rapidly crumbling. One of the few who are mentally and emotionally prepared for the end of the world is Cody Sifko, a youth who quickly becomes the inspiration for the others. When a strange homeless woman names him “Father of Nations,” is she seeing his future or her own delusions? As winter and a hate group try to destroy Laurel Hills, can Cody overcome personal tragedy and seize his destiny?

You can learn more about Larry and his work at his blog-
Tales from FAR Manor
Scribbled by Unknown at 6:00 AM

Hi Taryn! Thanks for having me today, it was a lot of fun filling out the questionnaire. Hope everyone has much productivity and success with their writing!

Thanks for joining me today, Larry and I wish the same to you. So glad you came to visit.