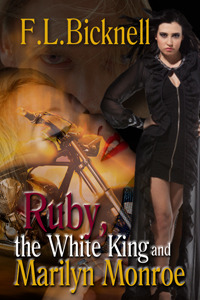 Reincarnated over the centuries. Stuck with a ditzy Marilyn Monroe lookalike. Falling for a rich albino guy. It’s just Ruby’s luck for Hell’s “real” angels to ride into this life and screw it all up.

F. L. Bicknell's work has appeared in a wide range of genres such as Would That It Were, Touch Magazine,  GC Magazine, Ohio Writer Magazine, Waxing and Waning (Canada), and The Istanbul Literature Review (Turkey) just to name a few. Faith was a regular contributor to Gent under her pseudonym, Molly Diamond. She has also had fiction published in Hustler’s Busty Beauties, Penthouse Variations, Twenty 1 Lashes, and was a regular contributor to Ruthie’s Club for three years. In addition, Faith has many e-books and some print titles published under various pen names.
For two years, Faith served as the co-editor of The Tenacity Times and she served as the managing editor for two e-book publishers for thirteen years until she resigned in 2009 to focus on her writing career. She is represented by TriadaUS Literary Agency (www.triadaus.com).
Scribbled by Unknown at 6:00 AM