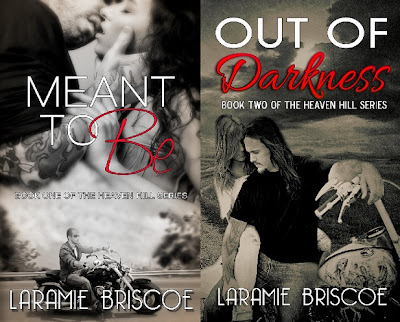 Awesome fellow Kentucky Independent Writer, Laramie Briscoe recently released her first book, Meant to Be. With the release of Out of Darkness- BOOK 2 in the series, Meant to Be is currently FREE, so go on and get it and get hooked!! I know I'm looking forward to some down time so I can get started on them too.

MEANT TO BE Book 1 in the Heaven Hill Series
(CURRENTLY FREE on AMAZON! Click image above to find both books.)

When Denise Cunningham is served with foreclosure papers on her birthday it’s the last straw in a long line of bad luck. Sitting and crying about things has never been how she solved her problems, but this time she decides to do just that. A phone call interrupts her pity party and changes the course of her life forever.

William Walker Jr., known as Liam to his club, needs a new recruit that is just naïve enough and desperate enough to do what he asks without question. When Denise Cunningham lands in his lap, he decides to hire her - not because he wants to, because he has to.

Neither are comfortable in their new roles, but he needs help and she can’t stand to lose anything else.

As bullets fly and a local Bowling Green, KY reporter works to bring the club down, Liam and Denise find themselves getting closer to one another. When the stakes get high and outside forces try to keep them away from each other, they have to decide if they really are meant to be.

OUT OF DARKNESS Book 2 in the Heaven Hill Series
NOW AVAILABLE!

Meredith Rager’s life completely changed the night she was attacked by an unknown person. Once a vibrant force that threatened everything about Heaven Hill, she is now under their care. The only place she feels safe is inside their compound. When she decides to take back the part of her life that her rapist took away, she discovers secrets that once again could tear the club apart.

Tyler Blackfoot came into the world a John Doe. An orphan from the moment that he took his first breath, the only thing anyone knew was his Native American heritage. For most of his life, he’s been alone – except for the club that has taken him in as their own. When he rescued Meredith, a protective side of his personality came out that he never knew he had. Protecting her means everything – even when he discovers danger might be closer than either of them thought possible.

Together, the two of them are trying to make a life for themselves. Against everything they have, they’re hoping to see the light that will lead them out of darkness.

No doubt your site is amazing and I really like it. Nice writing, you are doing great effort, your way of writing is unique. Love this site.