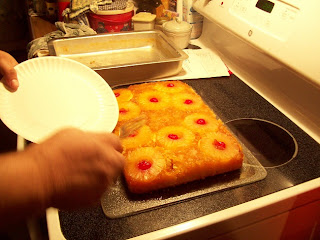 Of course, the big surprise to me, was that he'd taken the money my parents sent him and bought me a vase of fresh cut wildflowers, just because. He said it was what he wanted to spend his birthday money on. I kept telling him he hadn't had to do that, but each time I looked at the flowers, I couldn't help but smile. I'm blessed. 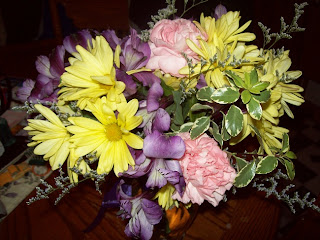 Once the kids got home from school and my stepson's mother picked him up for the weekend, hubby, daughter and I headed out to have his birthday supper at his favorite local Mexican restaurant, Los Mariachis.

After filling our tummies, we returned home to relax and watch television. Hubby dozed off in no time flat. Saturday morning was filled with grocery shopping and errands, then a walk at the mall, window-shopping Christmas ornaments at Hallmark and then meeting hubby's mom and stepdad for a birthday lunch at Ryan's (Steak & Buffet). I'd never eaten there before, but thought it was pretty darn good. Too many yummy foods to choose from! LOL

It wasn't until mid-afternoon, on our way home that I realized I must have forgotten my "SCENTsational Saturdays" post. I guess part of the reason for that was because my "Through the Years" perfume of choice was Lady Stetson. I remember wearing it, but I'm not remembering it as fondly as I originally thought. I received it for Christmas in my teens and I wore it because it was a much more mature fragrance than I typically wore. It made me feel more grown-up, but I've seen it described as a soft floral scent. My recollection of it was not so— it was a very loud scent on me, which gave me (and others) a headache.

Of course, rather than post about it, I spazzed and well, seemed to conveniently forget about it. ;) But....It did bring to mind instead, an incident from my youth that made me wonder how "personal" colognes and perfumes are to women, and to men. My husband usually wears Preferred Stock. It's his sole cologne choice, whereas, I LOVE a variety of fragrances because I enjoy picking to suit my mood. To each their own, but that got me to thinking- Fragrances are very memory-heavy personal items, so, are there fragrances in our lives we avoid like the plague?

I know myself well enough to know that I wouldn't necessarily want to wear the fragrance my husband's ex wore, unless it's happens to be one of my absolute favorite scents. At this point, I'm better off NOT knowing, but then I still have my favorite men's colognes, even though my husband doesn't wear them and some of them revive memories because they are the signature scent of an ex. Much as I might like to tell myself it's not personal, it is. The very hint of a familiar old cologne can resurrect a time from your past that you may or may not wish to recall.

And this is where the memory comes in- In my early twenties, my best friend called me one morning to see if I'd want to tag along to the amusement park for the day, with her and several of our other friends because they were shy one person to make riding in pairs a no-brainer. There were two other couples, her kid brother and my most recent ex, who still hung out with our mutual grouping of friends. My friend didn't want to be the odd-person out on rides.

I was in a fresh new relationship, but my new boyfriend had no problem with me going. The ex, on the other hand, was in a particular "mood" because I was along for the outing, the first time our group of friends all hung out since he and I ended a few months before. It was like one of those awkward sitcom moments. Its never easy to stay part of the crowd when there's a break-up. Not because we ended on bad terms or anything- it was just that I wanted a serious relationship and he didn't. I had been madly in love with him and thought we WERE in a real relationship and he basically told me "we're not together like that." So I ended it with him and started seeing this other guy. According to the ex at the time, we had "nothing" so there was "nothing" to end. {raised eyebrow} (of course, this was the same guy who told me I had his "permission" to go out with the other guy, to which I replied, "You're not my father or my husband, you have no say in what I do or who I go out with. You don't "own" me, so it doesn't matter if you give me "permission" to go out with him.")

I thought we ended on mutual terms, but as we hung out that day, it was clear he was jealous. He didn't want me, but he didn't want me to be with someone else. He was nice to me all day, but rude as hell to my best friend, just for pure meanness sakes. It was so bad that my best friend and I wandered off on our own the majority of the day and rode the Big Wheel just to get away from him.

Thing thing I remember most though was the ride home in the minivan. Someone had given my ex a gift set of men's cologne—you know the kind, those tiny bottles that usually come in a four or five pack box at the holidays—He carried them in his pocket all day, pulling them out and uncapping them to smell them. I can't remember what all scents he had- I remember a green bottle with a gold cap- perhaps Aspen, or maybe Polo. It was something from Ralph Lauren or Tommy Hilfiger or some other name brand.

Of course, being the big clumsy oaf that I knew, and loved, it wasn't long before IT happened in the back seat. IT being that when said cologne bottle was SPILLED in a van on a hot summer's day and the van was filled to capacity (8 of us) and we still had to ride for about an hour and half, it STUNK it all up to be damned, even with the windows cranked wide open.

By the time we arrived at my apartment building and I rolled out of there, sunburnt, gasping for air, and suffering a monstrous headache, what I remember was his blurted, angry parting words to me that went something like-

"Don't you dare go buy your "new" boyfriend this cologne, cause it's MY scent."

Bwhahaha! I don't remember my response, but I'm pretty sure it was rounds of laughter and something along the lines of "I wouldn't dream of it. My boyfriend's cologne doesn't STINK like that."

Are there colognes or perfumes you avoid because they have memories attached to them? Has anyone ever asked you not to wear a certain fragrance because it was something their ex wore?

How personal are fragrances for you? Do scents matter? Feel free to share, I'd love to hear about it.
Scribbled by Unknown at 10:28 AM

Here I am late on MY blog and you caught me with this one. Scents mean so much to all of us. I remember riding my horse on a crisp Autumn afternoon in New Jersey. The sun was hot but the shade was incredibly chilly and it was a blissful time to be on the back of a horse I loved. Autumn leaves smell different from Summer leaves, don't they? And that wonderful clean horse smell, along with the crispness of the stream we used to splash through to get to jumps on the other side. I guess that's really a memory of being young and happy. I stopped wearing scents pretty much when I started working with animals since they can interfere with communication. But a dear friend makes the most marvelous lotions and uses just a light touch of essential oils to give them a bit more personality. Right now my favorite smells like "rain." And now I MUST get to my blog!