#SCENTsational Saturdays- The Way to a Man's ♥- Meatballs

The Way to a Man's ♥Heart♥
Homemade Meatballs

In my current work-in-progress, Perfect Recipe for Love, Ben runs a restaurant called "Ben There, Ate That" and in one scene, he and the heroine, Sunni, are at the restaurant where she's learning the ropes about cooking. I attribute this very same recipe of mine, to Ben, as he explains to Sunni about growing up with four brothers and a single mom. His creativity in the kitchen had always been a blessing, as his meatball recipe stretched the meat just a little bit farther for their family when money was tight, so they could make two meals out of one. Now he uses it as a signature item on his menu for either spaghetti dishes or sub sandwiches.

I love this scene, as Ben, who's very close-off emotionally, gives Sunni a glimpse into himself and his past. Ben puts love into his food and that, to me, is a quality also about the way to a man's heart. He understands that the best and most delectable foods comes from being passionate about cooking, the love and care that goes into making it and is also proof that he's not as closed-off emotionally as he thinks.

Now, I'm not a fan of store-bought meatballs, because it always puts me in the mind of the Chef Boyardee I ate as a kid. My husband loves meatballs and he's not a fan of store-bought ones either. His mom has a recipe he wants, but she teases that he won't get it until she's gone, so we decided we'd just have to come up with something of our own. (That's something else I've learned about men, or at least my husband- if we create a dish together, it goes straight to his heart, too because it's "ours" and nobody else can claim it.)

I started with the basic ingredients from my meatloaf recipe- the pound of ground beef, onion, egg, then switched out the quick oats I normally use and replaced them with crushed saltines. Then I added Parmesan, garlic powder, Italian seasoning and garlic pepper for flavor and instead of using plain old ketchup I mixed in a little spaghetti sauce to moisten.

Surprisingly, this recipe turned out great the very first time I made it and it went over well with my husband and the kids. In fact, it turns out good every time. It works great for spaghetti and subs. 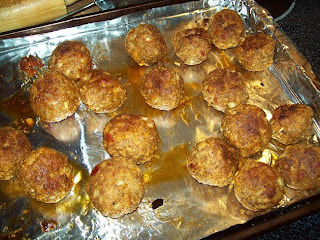 1 package saltines, finely crushed
1/2-3/4 cup parmesan cheese
Garlic Powder
Italian Seasoning
Garlic Pepper
1 lb lean ground beef
1 egg
½ of a finely diced sweet onion
1/2-1 cup, approximately, spaghetti sauce
Directions- Preheat oven to 350º
1.)                Crush saltines in Ziploc bag until fine. Add parmesan cheese, a few dashes of garlic powder, Italian Seasoning and Garlic Pepper. (I measure this by eye- as to what I think looks about right.) Seal bag again and shake until mixed thoroughly.
2.)                In large bowl, mix hamburger, egg, diced onion and spaghetti sauce by hand until well combined. Mix in cracker mixture, until it holds together firmly as if you were making a meatloaf.
3.)                Spray foil lined large cookie sheet with cooking spray. Shape into balls and place on cookie sheet. Bake in oven for 15 minutes at 350º. Remove from oven and turn over then bake for another 15 minutes till golden brown. 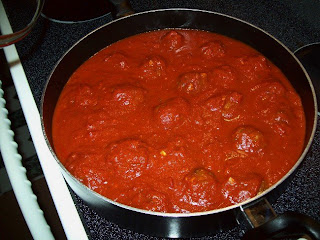 4.)                Place in large covered pan with spaghetti sauce(I used 2 jars to cover all meatballs) to simmer on low until all is hot and can be served over spaghetti. 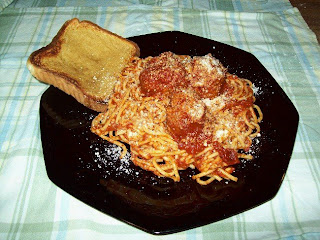 Hope you have a SCENTsational Saturday!
Scribbled by Unknown at 6:00 AM

Thanks for stopping by JQ and I hope you enjoy the recipe!