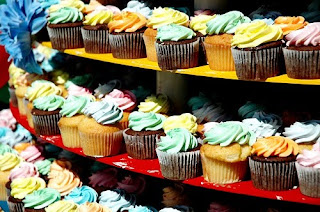 A lot of cupcakes and a lot of birthdays—

I was intending to post a blog like this a week ago on my birthday, but I got sidetracked and completely forgot I'd started a document just for that reason.

So- since I can't really think of anything noteworthy to write about in regard to my writing (though I did get through about 96 pages of "catch-up" on my WIP in the past two days)- I thought I might share some of the more vivid memories of things I've experienced or remember about my past 35 years.

These birthday musings conjured up all kinds of memories from childhood...things I don't talk about much anymore because it was either so long ago or I usually don't remember it unless I stumble across something that reminds me of a moment long passed. I try to share those memories with my kids so they will know how I spent my childhood.

Through my childhood I lived in 3 different houses. One was called the "Ripy" place- named after the original owner. It was my parents first house and the house they brought me home to after I was born. My sister was also born during the time we lived in that house. It was way out Highway 44 in Lawrenceburg in a small place called Glensboro. After my sister was born, we moved and lived for a very short period of time in a place I refer to as "The House at Wolf Creek." Sounds ominous, I know.... LOL

It's the one we thought might be haunted and my memories of it make me think—abandoned, ghostly plantation with a creaky dangerous balcony and lots of ancient history. Well, not "ancient" but old. That's one I will hopefully delve into further in a later blog. No one lives there any longer and I haven't seen it in years, though the last time I did it was in a dilapidated state and it nearly broke my heart because—though we didn't live there long—I still feel connected to that creepy old house and it's the inspiration for novel idea I have. I guess it's been nearly 9 or 10 years, perhaps. One of my exes took me to see it because he was fascinated by the ghostly tales and description I had given him and since I wanted to go see it again, he took me. I would like to make a trip down there and take pictures of it and surrounding area- mostly for my own reference and inspiration for when I begin writing the story I plan to that has it as a setting.

Of course, it was after that house that we moved to town and the suburbs and where my parents and sister still live, tucked into that little neighborhood that I love so much. Even being in town though, Saturdays were always my favorite day of the week because that's when we went to visit my grandparents who still lived in the countryside out 44. That's where I spent a lot of time running around the junk yard and going on scavenger hunts in old car bodies to find shiny little treasures or hidden litters of kittens or puppies. I plucked huge fat purple grapes from the vine behind my grandparents’ house that hung over an old broken refrigerator and climbed over the carcasses of long dead automobiles and car parts.

I “helped” my grandpa build the kitchen onto the house—mind you, I was probably somewhere between 3 and 5 and I hit my thumbnail with a hammer and ended up losing the nail- though luckily a new one grew back in its place. I drank water out of an old pump with a bright red painted handle that you had to yank into an upward position to turn it on and it would spit and sputter something awful. I tramped through the junk yard to find a can of udder salve for cuts. My first pet was a dog I named Macaroni because I loved “Yankee Doodle." He was a black lab I think or possibly a mutt, but when we moved to town, we had to leave Mac with my grandparents and they kept him chained up behind the tall fence they had to have for the junkyard so it wouldn't be an eyesore. I stepped on a rusty nail one time going with my aunt to feed Mac and and drove it through my flip-flop and nearly through my foot.

This is the same grandparents who owned cows, pigs, chickens, mules, ponies, etc. I believe I've posted about Midnight Lady before- the black mare my grandpa had and oh, how I loved her! I always rode her bareback. Come to think of it I’m not sure I’ve ever used a saddle. Maybe once and it freaked me out cause I was always scared she would blow her belly out when the saddle was put on and then it would be loose when I tried to get on her. That's a pretty scary idea when you're 14 or 15 and you think about it- supposing the saddle slid and flipped you upside down when you're that high up off the ground and then you would get dragged along with stampeding hooves so close to your head or dropped in the mud. LOL I spent a lot of time currying and combing her and talking to her. I also spent a lot of time shucking corn for feed with an old-fashioned crank handled iron shucker mounted on a huge barrel down in the feed shed where my grandpa stored the animals' food and the harnesses, bridles, reins and such. I love—and miss—the aroma of leather and oats and sweet molasses.

I also went fishing a lot at the "slab" with my grandmother down 44 near the old distillery or sometimes we'd go to the pond up behind the garage behind the house or the neighbor's pond up the road. She never failed to make sure we had our fishing trip supplies- peanut butter crackers, Vienna sausages or potted meat and saltines, Hershey’s bars and Coca~Cola for our outings. I learned about using crawdads for bait from her though I haven't been fishing in years and honestly don't think I could bait my own hook now and I sure haven't ever gotten fish off my line. That's one area where I will always still be too much of a girly-girl to do so. I do miss fishing though- more so because it was time spent with my grandma and grandpa and something I can't get back now.

I learned about the life cycle of “skeeters” from my Aunt Debbie. I stood on an old bucket flipped upside down while we fed Fred and Barney- two cows my grandpa bought to raise for meat. She pointed the mosquitoes out in the water trough and told me how they grew in the water and then took wing, etc. She also helped me explore the worlds beneath stones and bricks- watching ant trails and roly-polys and earth worms wiggling across the gravel after a rain. I have a slight penchant for stray and abandoned baby animals like my aunt too, and I have nursed baby animals with eyedroppers—in fact, I took care of a pair of orphaned baby possums at one point, for a very short time(until my grandma had my uncle set them "free" cause she hated them- at least I think that's what happened LOL).

I spent rainy days indoors and sometimes my uncle would bring me a steering column, wheel, key and all up to the house so I could sit in a chair and pretend I was driving. When I was really little I remember there being a "board" swing out behind the house and I'd spend a lot of time making mud pies in old pots and pans. When I got older, my grandpa and uncle put a tire swing up out in front of the house and me and my sister and cousin would stay out there all day long. We also sat on the hoods of cars out in front of the house and waved at everyone going by on hot summer afternoons. That was a big thrill of course- made you feel like you knew everyone in the county if they waved back or honked at you! LOL It also wasn't uncommon to find us girls sitting on hay bales or tramping around down near the creek, just to feel like we were journeying into the wild- going deep into the "jungle" in search of undiscovered creatures and mysteries.

These memories don't even encompass much more than a few years of my life though- perhaps five, ten—maybe fifteen. Thinking about it brings a sort of melancholy ache to my chest, my heart- for loved ones long gone and moments spent lazily believing that time moved too slowly and the hazy humid days of summer and the long cold nights in winter would never pass quickly enough until I could be all grown up and really "have a life of my own." LOL

Who knew? I didn't realize it was actually moving faster than I could have imagined and those moments were gone in the blink of any eye- the flip of a switch and my life transitioned seamlessly from childhood to adulthood without my really knowing it had happened.

That's a lot and yet it barely skims the surface...

Have a wonderful weekend everyone and I hope you have a beautiful Valentine's Day with your significant other and/or your family and friends.

It's a day set aside (albeit a bit commercially) for LOVE—So love everyone within your life's circle and be grateful for all who have crossed your path, who are in your life now and those who may be just around the corner. Love comes in array of sizes, shapes, and colors that can fit all, so don't forget someone just because they aren't your "romantic" love. Celebrate all the loves in your life- friends, parents, children, etc. They are all special because you love them and they love you. You probably have far more Valentines than you can possibly know.

Don't forget to let them know that, cause time does move faster than we can imagine!

Happy Valentine's Day!
Scribbled by Unknown at 8:05 AM

Taryn, the way time speeds up, the older we get, is what scares me the most. I'm 20 years older than you and--I'm sure you've heard this--with each passing year time flies by ever faster.

Your post gave me a smile. I lived in some creepy places, too, when I was a kid. One place even had a dirt floor in one of the rooms. Imagine that today. I also stepped on a nail sticking out of a board and it went nearly through my foot. I always loved fishing, too, but couldn't bait a hook. I've shot many a snake with my pistol but I can't stick a nightcrawler on a hook. Go figure. :o)

Have a good weekend. Happy Valentine's Day and a Happy Belated Birthday to you.

The post about the houses in your life made me remember my houses. Happy Valentine's Day! and Happy belated birthday from me also!