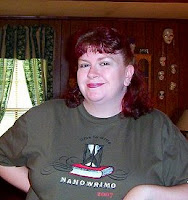 Got my NaNo shirt last Thursday. It's COMFY! Soft cotton and comfortable. I'll enjoy writing in it along with wearing the shirt I got last year.

I actually have been working on revisions on last year's Nanovel this past weekend. I've gone from around 80k to almost 83k. That was just from adding some of the scenes I felt were necessary from the main female character's POV.

She was lacking- a flat character who I wasn't sure held up her end of the bargain on being the woman a reader would WANT and HOPE the main male character would end up. So I'm giving her depth and even found a friend for her that I didn't know existed. When I originally wrote the story, I had written it strictly from the male M/C's POV, but after having reviewed it a bit, thought back on how things play out and had time to think about it long and hard because I knew something was missing, it hit me one day that she wasn't nearly as deserving of the role I gave her in his life unless I wrote more of her side too.

I've also discovered just how LONG my chapters ended up being. There were only 13 chapters when I finished. Several chapters ran very long, without scene breaks where they should be, so that's been part of my revision plans...breaking them up where they need to be broken down. Changing my sentences to flow more smoothly, adding here, extracting there. I feel like a surgeon. LOL

So now I'm off to work on that some more- Operation: Polish This Novel!

Have a great Monday!
Scribbled by Unknown at 9:52 AM

Dang, if I'd known we got t-shirts, I might have signed up for Nano write. LOL.

Good luck on getting revisions done. I have one more page to write on an ms I need to send to my editor tomorrow. Just one more page. Eeeek and I can't seem to find the words. Oh well. It will come. I have faith.

Oh I still had to pay for my T-shirt! LOL But I think a portion of the proceeds go toward the donations for the site and the Young Readers Program and such.

Thanks in regard to my revisions..Yesterday I worked and worked on it and I'm on page 218(Chapter 22 now), but I've still got a ways to go(374 pages total at the moment).

Thanks for stopping by too!